Wow! What a sojourn it’s been! Posterous declared that it was closing up shop some months ago, but it’s taken me a little bit to get my own domain and wordpress setup sorted out. So, if you’ve been following me via the old rss, you’ll need to add the new one.

Many thanks to the very darling Hope who provided me with support, tech expertise, and hosting.

I’m now on my way to learning the intricacies of CSS – so far it makes more sense than programming in Ruby does, namely… I tell something to do something or look a certain way, and hey presto! It does! So, expect the look and feel to change over time while I find my feet and prettify the site accordingly.

It is nice to have an audience writing space again though.  I have a heap of things I need to write, so a preview of posts to come…

Now that I’m flexing my writing muscles again, is there anything you’d like me to write about in particular? Mostly, I’m curious…

This past weekend I’ve been pet sitting, one of the pets has been the Pointiest Greyhound In The World (PGITW), affectionately known as Princess Ally. Below is a picture of her cuddled up in the crook of my arm while I was catching up on all my blog feeds. 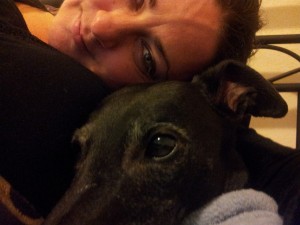 Ally and I cuddled up together…