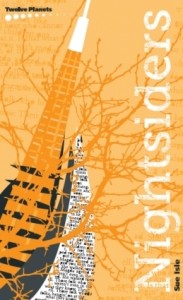 In a future world of extreme climate change, Perth, Western Australia’s capital city, has been abandoned. Most people were evacuated to the East by the late ’30s and organised infrastructure and services have gone.

A few thousand obstinate and independent souls cling to the city and to the southern towns. Living mostly by night to endure the fierce temperatures, they are creating a new culture in defiance of official expectations. A teenage girl stolen from her family as a child; a troupe of street actors who affect their new culture with memories of the old; a boy born into the wrong body; and a teacher who is pushed into the role of guide tell the story of The Nightside.

This book is the first of the Twelve Planets, single author collections produced by Twelfth Planet Press and is a strong start to such a unique project. This collection by Sue Isle features four interwoven stories, each complete in its own way and each contributing to a larger sense of a dystopian future Australia. This world is painted so vividly and I join the chorus of others who hope that the author may venture back into this universe with a novel at some stage.

What I most appreciated about this story is that we’re introduced to the world of Nightside through the eyes of Kyra who is both young and confused. In some ways her understanding of the world around her is solid and broad, but in other ways there are many unknowns and her naivety shows. I appreciated that Kyra’s understanding of things centred around rules – but that where you were and who you were engaging with meant the rules may be different. I also liked that it is kindness, that Kyra reached out to Alicia that motivated the girl from the Drainers to help her in turn when Nerina turned against her.

This story is a subtle introduction to post apocalyptic Perth, called the Nightside because only the Drainers walk the day time any longer. The story that Isle has written presents both harsh realities of a broken-down society post apocalypse but also connection and hope, how people come together and work together too. Of particular note is the idea of choice, for Kyra, who has had so little choice in her life. The notion of choice is what lingers after this story has finished. The Painted Girl is a fantastic introduction to this world and its stories.

Nation of the Night

This was one of my favourite stories of the collection. Ash is such an interesting character and following his journey to pursue self-hood was powerful. In the present day, pursuit of identity presentation and representation, aspects of gender and the sexed body are fraught and difficult to achieve. In this story Isle explores what it may look like for a transgendered person in a post-apocalyptic society, where medical care is much more scarce and choices seem both more and less limited.

What really stayed with me was the difference between the present I am reading from, and the present in which Ash finds himself. Although many of the difficulties that exist outside the book in the present day, still exist in some form for Ash, the simple acceptance of him by Prof. Daniel, the doctor and those he meets in Melbourne. The question is only around his capacity to make adult decisions about himself, his body and his life – not interrogating the truth of his experience of self and gender. Such a sharp commentary on the state of things here in my present as a reader.

My only criticism with this story was that although the journey to Melbourne and home again was described as difficult that didn’t really seem to be the case. Instead, it was that Ash was an outsider in Melbourne, even as a temporary visitor that seemed more difficult to navigate – the lack of accommodation, lack of familiarity with the city and it’s particular rules. Additionally, even the constraints on the doctor in doing the favour for Ash in performing the surgery, what was possible and what his recovery would look like.

I appreciated the New Zealand family and their point of view that Ash met. Their experience and point of view provided more context as to the Eastern States and how the evacuation from the West had affected them. How, the city was trying to keep people out because of overcrowding and limited resources, how some people were lesser than others as immigrants and what the effect of this was. How, Nightside might seem like a better life to some if you found you couldn’t keep things together in Melbourne. That juxtaposition of difficulty and nod to the idea of the grass being greener on the other side was well done I thought. I found myself wanting to know what happened to the family as Ash headed home back to Perth, ending the story.

One of the themes that I thought this story highlighted, was the nature of interdependency, connection and reliance on others for shared wellbeing. The Elders rely on others to help support them, and they in turn provide support, care and knowledge. I am curious as to how Tom’s play troupe came together and why it holds such importance in their small community – there seems like there’s a story there. Not that I dispute the importance of story and community in a society like Nightside, just it seems interesting that it is prominent and held with such respect alongside survival activities – as though it is of equal importance. The why of that is interesting to me and I wish that had been explored more.

Although it’s suggested that the pages that Shani finds of a screenplay could stir up more trouble than they are worth (is the title a reflection of this I wonder?), the trouble itself doesn’t really manifest. Although the Elders do leave their houses and come to see the play – but I’m never sure what actually makes this play different from the rest put on by Tom’s troupe – why is it that the youngsters putting on the play is what shifts the balance and awakens the Elders somewhat?

I feel like this is a story of questions, that this is a story that provokes but doesn’t satisfy and that is perhaps one of the points. So much is unknown, by the youngsters, so much is forgotten or painful to the Elders, what they create together is the in-between. This is an intriguing story and I loved that we got to see Ash again, back from Melbourne and happier in himself and also accepted by the others.

My other stand out favourite from the collection. I loved the way that we started the book with a confused young girl, who introduced the reader to Nightside, and that the collection ends with the story of Miss Wakeling an old woman adapting for a the future and being confronted with the need for change. I love that Shani and Itch are getting married, and have sought out the Aboriginal Elders out on the fringe of the Nightside, specifically because they see the importance of change and growing together, sharing knowledge and moving forward. There was so much hope in this story, and so much suggestion of coming together in a way that hadn’t happened before. I also love that the notion of knowledge and school and what education is useful in a dystopian future? This was such a great ending to the collection and also seemed like a beginning. I would love a novel from Miss Wakeling’s point of view about her journey out to the sea.

There was so much to enjoy about these stories, diverse characters and situations, points of view, parallels to the present day that were nicely pointed. I loved that both Melbourne and Perth were so recognisable to me! I love that the apocalypse has already prompted adaptive changes from the inhabitants of Nightside – the children see better in the dark for example. There are so many women here and they are simply capable and interesting in their own way – even Nerina who is cast as perhaps the only unlikable character in the book. I almost didn’t notice this because it just seemed so normal and comfortable to read – and then I remembered how rare that is. Also, I love that this is not a gritty story of horror-survival but one of massive change, but still with community at its heart. I just want to reiterate how  much I’d love a novel from this world, it’s so interesting and I want to spend more time here.