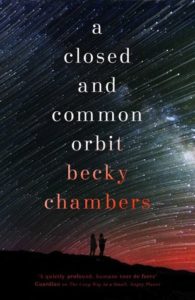 Lovelace was once merely a ship’s artificial intelligence. When she wakes up in an new body, following a total system shut-down and reboot, she has no memory of what came before. As Lovelace learns to negotiate the universe and discover who she is, she makes friends with Pepper, an excitable engineer, who’s determined to help her learn and grow.

Together, Pepper and Lovey will discover that no matter how vast space is, two people can fill it together.

The Long Way to a Small, Angry Planet introduced readers to the incredible world of Rosemary Harper, a young woman with a restless soul and secrets to keep. When she joined the crew of the Wayfarer, an intergalactic ship, she got more than she bargained for – and learned to live with, and love, her rag-tag collection of crewmates.

A Closed and Common Orbit is the stand-alone sequel to Becky Chambers’ beloved debut novel The Long Way to a Small, Angry Planet and is perfect for fans of Firefly, Joss Whedon, Mass Effect and Star Wars.

A Closed and Common Orbit is an incredible follow up to the standout A Long Way to a Small Angry Planet and Chambers has outdone herself in bringing to life a whole new set of characters. They’re familiar faces, but the story has shifted away from the crew of the Wayfarer and now we follow the journey of Pepper and AI Sidra – formerly known as Lovelace. One of the aspects of this novel that I appreciated most right from the beginning was the emphasis on names and their importance to an individual in how they express themselves. Names have history, they have a loadedness, they can be given, applied, attached, chosen, searched for, and I imagine they could even be grown. Here there’s no ceremony or poignancy around our AI protagonist choosing her name – it’s a necessity and aside from a comment from Pepper about names having weight and importance and that it would be nice to have more time, it’s not really possible and one must be chosen. And so we meet Sidra, almost as she starts to meet herself really.

The story of Sidra is one where an AI protagonist comes to terms with being in a body that doesn’t feel like her own, in a story and a narrative that she’s expected to build, but which she feels at odds with. And yet, despite the ways in which her inherently technological nature is reinforced, so to is her sentience. She struggles with some of the aspects of self-determination, and embraces others and I truly think that the writing of this kind of AI body is one of the best I’ve seen in that it tackles some of the ways in which plonking an AI into a humanesque body isn’t a like to like transition. Instead, overlays of memories and associations, textures, and sensations are used as associations with stimulus that Sidra comes across – particularly when eating or drinking. It’s a great touch.

I love the way that even as we explore Sidra coming-of-age we also look back into Pepper’s history, including how she met Blue. And here, once again Chambers gives us the depth of a story that is at its core optimistic, but where there is depth, and consequence – bad things happen and they must be acknowledged and dealt with in some way. Giving Sidra space and opportunity to explore her future is in some way Pepper’s way of coming to terms with her own past and it’s a lovely  narrative circle, we immediately identify with the nobility of Pepper’s aims, and our hearts weep with her in how confronted she is by this as well, searching for her own long lost AI companion.

There is so much to love about this book, and it’s similar in what was there to love in the first book. Stories of found and chosen family, of friendship and relationships that are negotiated and complex. Within the story there is queerness and differences in gender identity explored, but it’s not trite or token, but built into the story and character interactions without also ever being ‘the point’ of the character to be ‘the genderqueer one’ – it’s simply one personality trait amongst many inherent to the character, and this is true of the others as well. It’s warm and refreshing and it means I can see myself in the story – even if I’m not explicitly there, I’d fit, I’d make sense, I wouldn’t be the villain, nor outcast necessarily and that’s always a win for me. There’s spaceships and video games, virtual reality, storytelling, tech and hacking, politics and cultural differences between groups of sentients. There is so much scope in this universe that Chambers has created and I can’t imagine a book in this universe that I wouldn’t jump at the chance to read.

If you enjoy space opera, particularly with an optimistic view, you will enjoy this. If you enjoy books with heartwarming characters you can fall in love with and feel bereft without, you will enjoy this. If you want a coming-of-age story with a difference, with sentient AIs and everyday-heroes then you’ll enjoy this. The writing is delightful, I read this voraciously and loved every second. The book came to life for me and I want to reread it again already – it’s incredible and again, one of the best books I’ve read this year.