I’m glad I was reading my interview with Justine Larbalestier during the day time when the sun was out because her insight into psychopaths and in particular women who are psychopaths is truly chilling!  I interviewed Justine as part of Snapshot 2016 and the interview is reposted here from the Australian SF Snapshot Project. #Snapshot2016 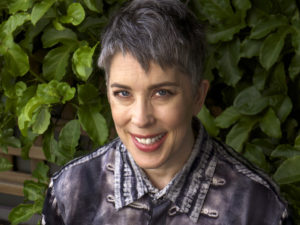 Justine Larbalestier is an Australian–American author of eight novels, two anthologies and one scholarly work of non-fiction, many essays, blog posts, tweets, and a handful of short stories.

Her most recent book, My Sister Rosa, is about a seventeen-year-old Australian boy whose ten-year-old sister is a psychopath. It’s set in New York City and published by Allen and Unwin in Australia/New Zealand and will be published on 15 November 2016 by Soho Teen in North America.

My previous novel, Razorhurst, takes place on a winter’s day in 1932 when Dymphna Campbell, a gangster’s moll, and Kelpie, a street urchin who can see ghosts, meet over the dead body of Dymphna’s latest lover, Jimmy Palmer. Of her other books the most popular are the novel Liar and the Zombies Versus Unicorns anthology which she edited with Holly Black.

Justine lives in Sydney, Australia where she gardens, boxes, and watches too much cricket, and also in New York City, where her game of choice is basketball. She’s a season ticket holder for the New York Liberty.

You were a WisCon 2016 Guest of Honour, what was it like returning to Wiscon having previously attended as a regular con-goer in comparison to attending as a guest? Also, what was your favourite part of the experience?

It was strange. Though I was once a regular con-goer there, I hadn’t been in ten years. Last time I was there YA had almost no profile. I was asked, “What is YA?” Some folks were sneery, “Why would you write about teens? Ewww.”  Which is part of why I stopped going. But ten years later that had totally changed. I felt very welcomed and there were many other YA writers and readers there.

Aside from being a co-GoH with Nalo Hopkinson and Sofia Samatar, who are both incredible, my favourite thing was doing a panel on evil women with Mikki Kendall. She’s been doing research on female serial killers and I’ve been researching psychopathic women. She’s one of the smartest, wittiest writers around, as well as being an historian. It was the most informative fun ever. I wish all my panels were with her. 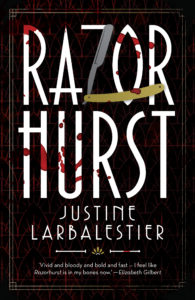 You’ve been working through the ideas surrounding ‘evil women’ in your recent writing. What have you most enjoyed exploring about the concept of evil so far?

I’m fascinated by the idea that women are naturally good on the one hand, yet on the other, there’s all the stuff about women being diabolical temptresses on the other. I’ve long been obsessed with Femme Fatales. I watched too many Films Noir, I guess. Razorhurst was my first book that featured one, but it won’t be my last. (To be clear, I don’t think any group is naturally good or bad. Google Australia’s Katherine Knight if you want a really gruesome example of a woman killer.)

For a long time there was a belief that there weren’t women serial killers. Or, rather, that they were rare. Possibly because women aren’t seen as capable of that level of violence? Spoiler: they are. But it’s becoming apparent that many female serial killers were simply overlooked because they mostly don’t kill in a showy way. No chopping up bodies, no taunting letters to the police. The women don’t want to be caught. They tend to work as carers and poison/suffocate their victims. Not many people realise that Arsenic and Old Lace was actually based on a real life case and that that real life case was absolutely typical of how women serially kill. Women also tend to get away with their murders more often because their kills look more like natural causes.

The evil women that are part of our mythologies tends to be evil in terms of their roles as wives/girlfriends and mothers: Medea, Jezebel, Delilah etc. Even when women are being evil to other women in those stories it’s usually because they’re in competition for men. A lot of fictional depiction of female evil assumes heterosexuality and probably wouldn’t pass the Bechdel test. The obvious exception being all those evil lesbians, but they’re seen as evil because of their rejection as men, so it’s still an evil understood in terms of mainstream understandings of sexuality. I.e. the only reason you would turn your back on men as a woman would be because you’re evil.

I’ll stop now as this is turning into a long-arse essay but, as you can tell, I have loads to say on this topic. Hence my writing yet another book about a female psychopath. This time she’s seventeen, rather than ten as in My Sister Rosa, and it’s from her point of view, not from that of her old brother. 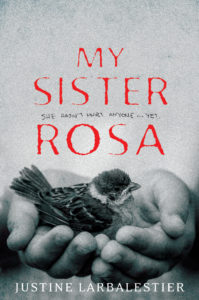 Aside from the psychological thriller you’re currently working on, do you have anything speculative in the works?

The kind of psychological thrillers I’m writing are monster novels, which I think are definitely part of speculative fiction. Psychopaths have been figured as monsters for decades now. In fact, I’d argue that most monsters in horror, science fiction, thrillers etc. are human, and when they’re not like, for example, the Godzilla movies, it’s often the evil military trying to fight them, who are the real monsters. With good reason, we fear ourselves the most. And the psychopath, the person with no empathy and no remorse, is kind of the distillation of our fears about our fellow humans.

I do not mean that psychopaths are literally monsters. Just that they’re figured that way in the genre and, let’s be honest, in much reporting of real life cases. What interests me the most about the way we see psychopaths is that they are human. So how do we deal with that? Not very well. How do we deal with the fact that a great deal of the evil inflicted on humans is inflicted by humans who aren’t psychopaths. We don’t.

This is so hard because I know many brilliant Australian authors but if I praise some of them I’ll be leaving others out. I also worry people will think I’m recommending them because they’re my friends, which I would never do, but it’s what some assume. Besides I recommend my friends’ books on Twitter often.

So I’ll recommend two Aussie writers I’ve never met. Check out Ambelin Kwaymullina. She has a fantastic YA trilogy, The Tribe, that’s not like anything else out there. In non-fiction I loved Finding Eliza: Power and Colonial Storytelling by Larissa Behrendt, which is a witty, well-researched account of the Eliza Fraser story, but this time including Indigenous versions of what happened. It’s the best kind of history because it made me rethink what I thought I knew. A must read.

Honestly, on most long plane flights there’s already an author sitting next to me. On the other side of me I think I’d prefer to have an interesting person from a completely different field. Lately, I’ve taken to questioning folks about the most common accidents in their occupation so I can figure out “accidental” ways my psychopath could bump people off. So sitting next to an expert on accidental deaths would be the best thing ever.