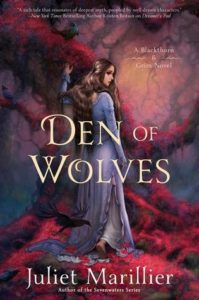 The “powerful and emotionally-charged” fantasy series from the author of the Sevenwaters novels continues, as Blackthorn and Grim face haunting secrets and old adversaries…

Feather bright and feather fine, None shall harm this child of mine…

Healer Blackthorn knows all too well the rules of her bond to the fey: seek no vengeance, help any who ask, do only good. But after the recent ordeal she and her companion, Grim, have suffered, she knows she cannot let go of her quest to bring justice to the man who ruined her life.

Despite her personal struggles, Blackthorn agrees to help the princess of Dalriada in taking care of a troubled young girl who has recently been brought to court, while Grim is sent to the girl’s home at Wolf Glen to aid her wealthy father with a strange task—repairing a broken-down house deep in the woods. It doesn’t take Grim long to realize that everything in Wolf Glen is not as it seems—the place is full of perilous secrets and deadly lies…

Back at Winterfalls, the evil touch of Blackthorn’s sworn enemy reopens old wounds and fuels her long-simmering passion for justice. With danger on two fronts, Blackthorn and Grim are faced with a heartbreaking choice—to stand once again by each other’s side or to fight their battles alone…

Den of Wolves is a superb conclusion to the Blackthorn and Grim trilogy. I have loved this series so much, it captivated me from the very beginning. I adore these characters, my heart has wept and broken with theirs, it has exalted with theirs and it has taken quiet joy in small things, justice and friendship as theirs has. I can’t be anything other than sentimental about this book, it was glorious. If you want a contained example of epic/high fantasy done well, this is an excellent example. Especially if you’re done with tired fantasy tropes of magical chosen one on a quest stories and so forth. Read this.

In particular, one of the things I loved most about these books is the consistent character development that the key protagonists Blackthorn and Grim went through. Some of their development they achieved through their relationship with one another, but they also developed independently of one another. The rich depth to these characters and their background stories, their reason for being, their reason for continuing on was compelling from the start, and no more so than this book. Blackthorn still wrestles daily with her geas where she cannot pursue vengeance for her family and the people she once spoke up for. Her discomfort with standing by idly while wrong continues to be perpetuated resonates with me. It takes Grim to remind her that rushing into vengeance that results only in futility and not in any change is pointless, and I value that too.

One of Blackthorn’s defining characteristics is her anger. Given my own discomfort with my anger, she is a fascinating character to explore this emotional experience with. Her anger changes over time, it is tempered but never decreases. It is leashed, but never far from the surface. It is clear that Blackthorn is at times consumed by her anger, that it controls her life rather than herself, but that too is part of the story and her learning. In Den of Wolves the shape of her anger has purpose, and though it is impatient and she battles with the need to do something, she also puts her anger to work doing what she can.

We finally see a conclusion to the overarching plot in this series with Den of Wolves. There is the culmination to Blackthorn’s quest for vengeance, but it occurs in a rather unusual way. It was such a satisfying vengeance, I felt like all the ways in which it needed to be fair were observed, all the ways in which acknowledgement of wrongs that could never be righted occurred, and that truly justice was done. There’s an idealism in how this book concluded, and thus how the series concluded that is especially attractive to me right now. This book and series are excellent for comfort reading if you need to know that everything will actually be okay, but that it will not be hand-waved away and the ending will matter.

Marillier is a very solid and satisfying author of fantasy, she never fails to deliver a book that is compelling, has depth, extols the virtues of kindness and makes you want to turn page after page, long after the hour of bedtime has come and gone. She is a favourite author of mine – and has been since I first picked up her books. I sincerely want to put this book and series in the hands of anyone who professes to appreciate fantasy. Den of Wolves is a magnificent conclusion to an outstanding series, and shows the brilliance of Marillier as an author. 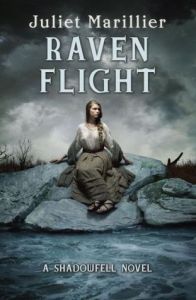 Neryn has finally found the rebel group at Shadowfell, and now her task is to seek out the elusive Guardians, vital to her training as a Caller. These four powerful beings have been increasingly at odds with human kind, and Neryn must prove her worth to them. She desperately needs their help to use her gift without compromising herself or the cause of overthrowing the evil King Keldec.

Neryn must journey with the tough and steadfast Tali, who looks on Neryn’s love for the double agent Flint as a needless vulnerability. And perhaps it is. What Flint learns from the king will change the battlefield entirely—but in whose favor, no one knows.

This book was much more to my reading taste from Marillier. I love Neryn as a character and I’m deeply invested in her story. I loved the continuation of this story, I love the interaction between Neryn and Tali, it’s everything I often get from male warrior companionship and so rarely get to enjoy in relation to female characters. Neryn isn’t a warrior but she and Tali are joined in their determination to win freedom for her country. Their friendship starts with such awkwardness and the growth is gradual and sincere.

There’s nothing contrived between these characters, you as the reader are simply invited in to witness the unfolding of the story, including of the friendship shared between these two characters.  I also really love Neryn’s romance with Flint in this book, it’s ephemeral and unrealised – it’s a romance of the heart and mind, it’s a promise that is yet unfulfilled and yet deeply hoped for. I love this expression of romance as being something that drives both characters to succeed, but also the way it reveals a weakness that can be used to exploit them.

Neryn is the kind of hero that I love best, she’s unassuming but not without pride in her ability and determination to do the best she can to play her role. I love the way she listens, the way she seeks to learn about her gift and how to use it with wisdom and restraint – the unfolding lessons from the Guardians show much promise in her character growth and she is compelling.

The end of this book was a big surprise – so sudden and tragic. Such a brave narrative choice and I think it will ultimately pay off – I know that I can’t wait to get my hands on the next book to find out what happens. Ravenflight is rich and deep with both character and story, the fantasy draws me in and I imagine the world in which the story unfolds vividly. This book was a wonderful note on which to end my Australian Women Writers Challenge reading for 2014. 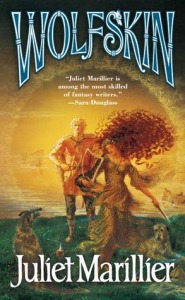 All young Eyvind ever wanted was to become a great Viking warrior–a Wolfskin–and carry honor out in the name of his fathergod Thor. He can think of no future more glorious. The chance to make it happen is his when his chieftain Ulf is brought the tale of a magical land across the sea, a place where men with courage could go to conquer a land and bring glory to themselves. They set out to find this fabled land, and discover a windswept and barren place, but one filled with unexpected beauty and hidden treasures… and a people who are willing to share their bounty.

Ulf’s new settlement begins in harmony with the natives of the isles led by the gentle king Engus. And Eyvind finds a treasure of his own in the young Nessa, niece of the King, seer and princess. His life will change forever as she claims his heart for her own.

But someone has come along to this new land who is not what he seems. Somerled, a strange and lonely boy that Eyvind befriended long ago has a secret–and his own plans for the future. The blood oath that they swore in childhood binds them in lifelong loyalty, and Somerled is calling in the debt of honor. What he asks of Eyvind might just doom him to kill the only thing that Evyind has ever truly loved.

Will the price of honor create the destruction of all that Eyvind holds dear.

I found this book a little harder to get into at first from other books that I’ve loved from the same author. But, it really did take hold of me and I enjoyed the book thoroughly. I never quite understood Someled and his motivations or actions, or Eyvind’s blind trust in him. Eyvind as a Wolfskin and the band of warriors in general were very believable and I loved their story. I loved Nessa’s story and her wisdom, her background her care and focus in her wise woman’s responsibility.

This seems to be much more a tale of romance than I am used to from this author – romance is a common thread but this book was much more straightforward in the portrayal, the other threads seem to me as though they are there to further the romance plot when I think they are bigger than that and resolving them through the romance was a little unsatisfying for me. I love romance fiction and the romance itself was satisfying, but less so the way the other story elements rolled into it. Also, I love the way that Marillier often focuses on female characters and that was less the case in this book and that also possibly affected my overall enjoyment – not that I didn’t love the story of the warriors, simply that there was such little presence from female characters other than Nessa – even her teacher was only present in a very secondary way that seemed more designed to further the romance plot. I enjoyed the romance plot but I think I wanted more from it with the culmination of the other narrative elements.

The abrupt story shift with the death of Ulf really threw me – the whole narrative seemed a little choppy to me, but the story itself was compelling enough to get past the way it didn’t quite flow in the reading. I’m used to the writing from this author flowing like water, the reading is fluid and I become immersed – that was harder to find with this particular book.  I enjoyed it, but it’s not my favourite title from her. Still, I am looking forward to reading the second book ‘Foxmask’.