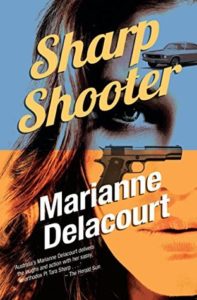 I reviewed Marianne Delacourt’s Sharp Shooter last year and fell in love with the Tara Sharp series. In honour of the series being re-released through the Deadlines imprint by Twelfth Planet Press, here’s my original review for Sharp Shooter, complete with a shiny new cover!

This re-release means Tara Sharp is global for the first time ever. It also goes without saying that I can’t wait to get my hands on the brand new book four that’s due out later this year!

When she tries to turn her inconvenient secret into a paying gig, her first job lands her in the middle of a tug of war between the biggest, baddest crime lord in town and the hottest business man Tara has ever met.

With only a narcoleptic ex-roadie, her pet galah and a vanilla slice for back up, Tara is ready to take on trouble with a capital ‘T’.