This time I’m going to try and bunch them up in the general fortnightish organisation that they started out in… we’ll see how that goes. The point of meal planning for me, for our little poly family comes down to a few things:

I’ve just done the meal plan for the next fortnight, but mostly the recipes are from recipe books in the house and are not easy to link to. Maybe I’ll write a few up if I like them well enough. I also think I’ve finally managed to find the one place in my house to photograph meals that doesn’t yield an overt yellowing of the light. No idea why it happens but anyway, hopefully I’ll get better at photographing things and making them prettier (soft goal, I’m not attached to this, only to actually taking pictures and sharing them).

So the whole meal planning thing has taken root in our household, and this is something I’m glad about as I think it makes a bunch of things easier – especially given my particular role in our three person household is managing of food decisions and a large chunk of the cooking. I’ve been using a Pinterest board to track my cooking and recipes so that both the result and the recipe are in roughly the same location, so take a look there if you’re interested. Below is a few dot points on general things I’ve learned in this meal planning process, mostly particular to our own situation but maybe useful for readers too, and below that a bunch of recipes and my commentary about making them, or not, and what worked and didn’t.

So some of the meal planning I have done in the recent months – note this is the plan and not it’s execution. These links are from mid July through until the end of August. There’s a bunch of stuff here and I initially tried to plot it out by meal plan sections but it’s been a bit too long for that to make sense. I’ll try and do it for the current fortnight’s plan in another post. 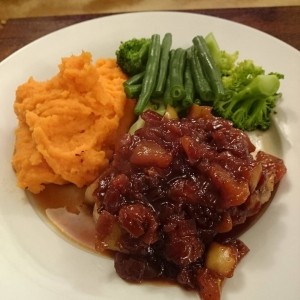 So I live in a poly household in Melbourne, myself and my partners – who are the ‘on paper’ relationship. I’m the ‘single’ person who lives with them. And unsurprisingly Centrelink have been awful, one of my partners earns too much, so his partner can’t get the Austudy he’s entitled to. I can’t get Austudy because even though I haven’t claimed it before, the fact that I have an undergraduate already precludes me from support when I need it. Because I of course planned the massive career change and letting go of 10 years I spent pursuing another career all for nothing…

We all contribute to the house, in various ways, and so we’re all entitled to the income. There’s not much to go around but it (mostly) pays the bills, the rent and groceries. I’m better than I ever have been about making groceries last, making food last and making it delicious and so we don’t often *feel* poor. Even though we rarely can have a night out, or dinner out, or go to the movies or any of those things we could  manage occasionally when we at least had some welfare support.

I’m writing about this because I am looking at the meal plan I made on the fly yesterday for the next two weeks to get us through a fortnight where anything we can avoid spending on food, can pay bills. We’re not late on anything, but we’re working hard to keep it that way. In any case, I thought I’d share what my meal plan was and how I decided on it for this particular fortnight. Namely, what stuff has past!me done that makes this next two weeks earlier. Let’s do that bit first:

And now for the meal plan. I reasoned that counting leftovers and the need for lunches for me at home and Ral’s uni lunches for the next two weeks, we needed about 9-10 meals.

So this is what the meal plan looks like:

So that’s 9 so far and I’ll see how far that gets us before I evaluate further. It’s a whole lot of guesstimation at the moment, so we’ll see how close or far off I am toward the end of things. (Maybe I’ll even remember to blog about it.) There are several options that are cheap that I can rope in at the last minute like Dal Makhani, or this gorgeous Broccoli Frittata which always impresses, or make a risotto or soup – those are always good go-to options.

So, there you have it, my angst, frustration and making the most of it in the form of meal planning. What makes things easier for this fortnight is, I’m home and I have very few commitments so I can do the cooking and make things work and spend extra time eking things out and adding to my stash of freezer meals without extra stress. The reason I’m trying to meal plan, spend as little as possible AND still maintain my freezer stash is because I’ll be away from home in June on prac, and it will make life a lot easier for Ral and Fox dinner wise if half of them are already made. It will also make it cheaper for them, which will be important because I anticipate needing more of our budget while I’m staying away from home and going to the hospital every day.

I have to say that my meal planning and frugal skills are both inspired by, and not nearly as well established or finely tuned as my best friend Sarah’s. She can do amazing things with meal planning and frugality. But all in all, I do well enough for what we need right now, and I pass it on to my partners. One  of whom is an exceptional cook, and also quite accomplished at making do, the other of whom is still learning the very basics of cooking. In my mind, this stuff is part of that basic learning.

Anway, have a picture of last night’s Tunisian Chicken dinner (not the prettiest plate unfortunately). Alas I forgot to take a picture of the cake! But I made this amazingly simple and delicious Chocolate Bundt Cake, which is not expensive to make and is one of the most delicious chocolate cakes I’ve ever made. 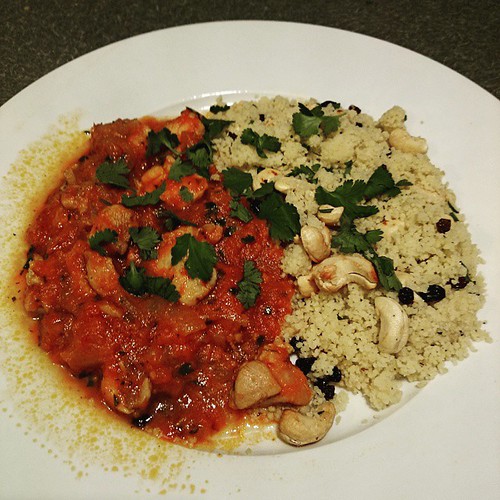