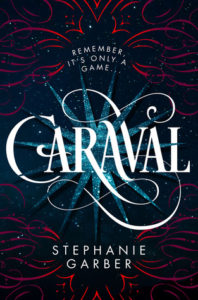 Whatever you’ve heard about Caraval, it doesn’t compare to the reality. It’s more than just a game or a performance. It’s the closest you’ll ever find to magic in this world . . .

Welcome, welcome to Caraval―Stephanie Garber’s sweeping tale of two sisters who escape their ruthless father when they enter the dangerous intrigue of a legendary game.

Scarlett has never left the tiny island where she and her beloved sister, Tella, live with their powerful, and cruel, father. Now Scarlett’s father has arranged a marriage for her, and Scarlett thinks her dreams of seeing Caraval, the far-away, once-a-year performance where the audience participates in the show, are over.

But this year, Scarlett’s long-dreamt of invitation finally arrives. With the help of a mysterious sailor, Tella whisks Scarlett away to the show. Only, as soon as they arrive, Tella is kidnapped by Caraval’s mastermind organizer, Legend. It turns out that this season’s Caraval revolves around Tella, and whoever finds her first is the winner.

Scarlett has been told that everything that happens during Caraval is only an elaborate performance. But she nevertheless becomes enmeshed in a game of love, heartbreak, and magic with the other players in the game. And whether Caraval is real or not, she must find Tella before the five nights of the game are over, a dangerous domino effect of consequences is set off, and her sister disappears forever.

I thoroughly enjoyed Caraval, it was a face-paced read that was enjoyable in the way that you don’t notice how much you’ve read until you should have gone to sleep an hour ago.  I loved the set up of the story and the game of Caraval with the mystery of its game master Legend.  The magic and the worldbuilding were deeply interesting and honestly I wish I could have seen more of this – especially inside the game world itself. For five days of game there was a surprising lack of detail and richness to the experience within it.

The characterisation was all pretty solid although I thought the father’s character was a little two dimensional as a villain. I loved the two sisters, although I was disappointed that they didn’t share more page-time together and I thought that there was a bit more telling about them rather than showing – Tella was almost absent from the book although critical to the story itself which I thought was actually a bit of a shame – I couldn’t relish in her triumph because I barely knew her. Scarlett was contradictory but in a good way and I thought I had a good chance to get to know her, but I thought that she was a bit too easily led and naive for someone who was supposed to be aware of being manipulated, based on her background. I did really love Julian’s character, and he was one of the stand out characters for me, he was complicated and interesting, was a great foil for Scarlett without being lost in her and without doing anything that made my teeth hurt.

I enjoyed the resolution to the story quite a lot, I thought it was quite fitting and I thought that the fact that there was a rhyme and reason to how Scarlett and Tella ended up at the game at all was well plotted. I was bewildered by the random arrival of the fiance – that whole sub-storyline was a bit clunky for me and I don’t think it played out as well as it could have. I didn’t much care for the cliffhanger, but I am glad to know that there’s more story, it was definitely compelling and enjoyable enough that I’m overtly looking forward to the sequel. This is an interesting YA novel, it’s not a coming of age, but it is a stepping out into the world in a way for the first time, and Scarlett comes to know herself and what she wants for her life a bit more, out from under the thumb of her father and the certainty of her betrothal. I love that the relationship between the sisters is so important and underpins the whole story even if they didn’t share the pages as much as I’d have liked, and overall I’d have loved to see more of Tella. Congratulations to Garber on an excellent debut novel.