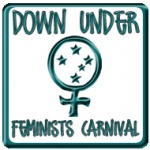 It’s the beginning of March and time for another Down Under Feminist Carnival, which I am hosting this month. Apologies for the belated arrival of things, I had most things pre-drafted and then the beginning of the month really came out of nowhere. Still, it’s International Women’s Day, so perhaps posting tonight is somewhat appropriate in any case.

Next month the Carnival will be hosted by Ana Stevenson at AnaStevenson.com, ana.stevenson [at] uqconnect [dot] edu [dot] au.

We’re also still looking for people who’d like to host the carnival in future months, it’s super easy, there’s lots of support with people sending through links and it’s a chance to promote the voices of women talking about issues of importance to us. Here’s the DUFC contact form and here is a list of future carnivals that have already been planned (pick any month that isn’t on that list). People will send you suggestions to help you out and there’s help if you need it too. Check out the Down Under Feminists Carnival homepage for more information.

A listening piece, Celeste Liddle of Black Feminist Ranter writes for The Age about how we cannot ignore the radicalisation of white men. She also discusses white men and violence and the threat of radicalisation in a podcast for the ABC. This piece is 14 minutes long, but although it’s ABC there doesn’t appear to be a transcript yet.

Faye Yik-Wei Chan is a Melbourne academic writing for the Australian Women’s History Network, sharing research from her thesis on the legal status of Chinese Indonesian Women, 1930-2014. Although this piece is not situated in Australia or New Zealand it is salient to the region and focuses on intersectionality and race outside of the dominance of white people.

Amy McGuire writes for The Monthly about how the Gap is wider than ever, despite promises none of our prime ministers have lived up to commitments on Indigenous affairs.

Emily McAven writes for SBS about how what research shows is best for trans kids is not actually surprising: treating them as they wish to be treated. This quote is compelling and resonates strongly for me: “When children feel loved and accepted for who they are they thrive”.

Steph and Liz from No Award talk about why they’re going to the footy, and how much the AFWL means to them. And here’s their commentary after getting to attend the first round of games.

Scarlett Harris has written for Paste discussing the impact of sexism and appreciation of WWE, and while the WWE is US based Scarlett writes from an Australian perspective on trying to purchase merchandise, and also the harmful way in which segregation between women wrestlers in WWE remains harmful.

I wrote about Midwifery and the Pink Collar Penalty where after my degree program for a protected position requiring maintenance of a registration, my minimum wage is still under $50k. Even though I’m supporting, educating and looking after women their babies and families during some of the most important and intimate experiences of their lives.

Anna Temby writes for the Australian Women’s History Network, reflecting upon the gendered history of public toilets in Brisbane, Australia.

Chilla Bulbeck writes for the Australian Women’s History Network, and demonstrates in her examination of the ‘gender gap’ in voting and why feminists must continue to prioritise a gendered analyses of politics.

Blue Milk writes on her personal blog of the same name, about her experience in criticising the government and how subsequently her private information was given to a journalist and used against her publicly.

Sarah of Writehanded reminisces on starting her blog and why it remains important to counteract the negative stigma about beneficiaries that is rife in New Zealand.

Yen-Rong of the Inexorablist wrote this great piece on what she thinks white men are thinking when they stare at her, because women in public are still for the consumption of others, right? With a side order of racism.

Emily McAven writes for SBS about marching as a family and finding community at Pride.

Sometimes parenting is being optimistic, and having that optimism dashed to pieces. Emily of Emily Writes writes about the time she attended an Arts Festival launch hoping it would all be fine (spoiler: it wasn’t).

Amanda from Spinoff Parents talks about the other end of parenthood, where your children as adults have left home and you’re coming to terms with this.

Petra writes for New Matilda on the subject of the universal basic income and its importance to motherhood. I appreciated the way Petra identifies that discussions of women and inequality are different across demographics of women who are, aren’t, or once were mothers.

Blue Milk reminisces on extended breastfeeding, linking to a bunch of other photos and posts she’s done on the subject in the past.

TigTog’s post on Hoyden About Town on discovering the Tomlin rule is timely and apt given the State of Australia, and everything else politics around the globe. I have so much time for Tomlin and her awesome quippiness in general.

Bethwyn of Butterfly Elephant also talks about her need for self-care and compassion, with some suggestions others may find useful and how important it is for her ongoing health.

Giselle Au-Nhien Nguyen wrote for SMH about online dating and burn out. How it had given her sexual agency, but that recently she had become burned out by the whole experience.

Alex of Acts of Kitchen talks about making a cake, a pie, and interviews Kate who talks about jams, jellies, chutneys and marmalades. This is a podcast link, but Alex does great interviews and this is a conversation between Australian women about things that are interesting to them, wholly in our wheelhouse! This piece is just under 24 minutes long, but has no transcript, I included it as something different for people who may like to listen rather than read.

Alex, from Melbourne Women’s Network talks about the douchiness of Melbourne’s speciality coffee scene, {broken link removed} talking about the trend for male baristas to cling to their coffee machines with serving customers being way beneath their esteemed coffee calling.

Hsu-Ming Teo is a literary novelist and cultural historian who has written for the Australian Women’s History Network about origins of the rural romance genre and the history of literary representations of romantic love on Australia’s rural frontier.

Deb Lee-Talbot’s writes for the Australian Women’s History Network, analysing a book about how the Red Cross became as a significant Australian institution.

Justine Larbalestier talks on her personal blog about the problem with ‘boy books’ which is not that there is a lack of books for boys but the assumption by adults that boys will only read books about boys.