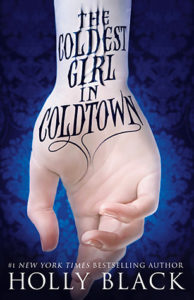 Title: The Coldest Girl in Coldtown

Tana lives in a world where walled cities called Coldtowns exist. In them, quarantined monsters and humans mingle in a decadently bloody mix of predator and prey. The only problem is, once you pass through Coldtown’s gates, you can never leave.

One morning, after a perfectly ordinary party, Tana wakes up surrounded by corpses. The only other survivors of this massacre are her exasperatingly endearing ex-boyfriend, infected and on the edge, and a mysterious boy burdened with a terrible secret. Shaken and determined, Tana enters a race against the clock to save the three of them the only way she knows how: by going straight to the wicked, opulent heart of Coldtown itself.

‘The Coldest Girl in Coldtown’ is a wholly original story of rage and revenge, of guilt and horror, and of love and loathing from bestselling and acclaimed author Holly Black.

What I love about Holly Black’s fantasy is that she blends in the creepiest and horror drenched things into this deep and dark fantastical setting, that just shies away from the effect of the uncanny valley – except it’s poor comfort because in lots of ways this story seems almost plausible, almost possible. Holly Black gets me to read creepy more consistently than any other author because she goes for the thrill so to speak, rather than having me up all night afraid under my covers. Everything she writes is a little bit moreish and this book is no different.

I found Tana interesting, self deprecating but not obnoxiously so, she’s ordinary and recognises that there’s little reason she should be alive at all except… dumb luck and being opportunistic and improvising as she goes. It mostly works, except it doesn’t. She has a plan and she mostly sticks to it – even when it’s ill advised. When things go wrong, she makes a new plan and so on – I like that she’s rattled but moves forward anyway. She’s likeable and mostly tries to do the right thing – whatever that seems in the moment. Her moral compass isn’t skewed as such, but this story definitely shows that there are grey areas.

I also loved Gavriel – a knife edge character if ever there was one. Mysterious, deadly, adventurous and dangerously susceptible to the most basic of gestures – someone trying to help him out. I loved getting a sense of his history without being drowned too much in it, enough to understand, to get him to appreciate him in the modern world. I also loved his regard for Tana – it was never creepy, or inappropriate, he allowed the romance to develop but didn’t really start or encourage it, not until it was well and truly present for them. And it wasn’t like Tana was a silly teen falling for the sexy vampire – it was far more ordinary than that, an ordinary-ish girl falling for someone who operates outside the boundaries of what is ordinary or normal for most people, with a side of vampirism and immortality sure, but the actual building of the romance was completely normal. Refreshingly so.

I love that he was there for Tana in the end when she decides to try and forgo immortality and purge the infection by waiting it out. I love that he accepts her decision and promises to help her see it through, and because of his own past experiences and torture… he’s capable of doing that for her. It’s an odd and slightly horror tinged romantic gesture, but it is romantic all the same.

Nothing about this book or story is neat, but it is beautifully written and tells a vampire story that is both unique but also plays on my favourite elements of vampire fiction: the beautiful but deadly monsters, fascination with the essence of humanity, and romance. It brings something new to both YA, urban fantasy and vampire fiction, I really enjoyed this book and thought it was outstanding.