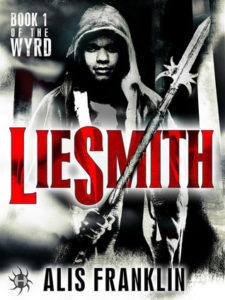 At the intersection of the magical and the mundane, Alis Franklin’s thrilling debut novel reimagines mythology for a modern world—where gods and mortals walk side by side.

Working in low-level IT support for a company that’s the toast of the tech world, Sigmund Sussman finds himself content, if not particularly inspired. As compensation for telling people to restart their computer a few times a day, Sigmund earns enough disposable income to gorge on comics and has plenty of free time to devote to his gaming group.

Then in walks the new guy with the unpronounceable last name who immediately becomes IT’s most popular team member. Lain Laufeyjarson is charming and good-looking, with a story for any occasion; shy, awkward Sigmund is none of those things, which is why he finds it odd when Lain flirts with him. But Lain seems cool, even if he’s a little different—though Sigmund never suspects just how different he could be. After all, who would expect a Norse god to be doing server reboots?

As Sigmund gets to know his mysterious new boyfriend, fate—in the form of an ancient force known as the Wyrd—begins to reveal the threads that weave their lives together. Sigmund doesn’t have the first clue where this adventure will take him, but as Lain says, only fools mess with the Wyrd. Why? Because the Wyrd messes back.

This is one of the books I read for the January #boutofbooks, and you can see how much the year got away from me by the fact that it’s now December when I’m writing up my review. Oops.

I loved this book, I am deeply attached to urban fantasy as a genre and I think this is one of the best I’ve read in recent years. I loved Sigmund as a character, he was an ordinary guy – an ordinary geek, with a job, hobbies, friends and an unexpected talent for being able to tell when people are lying. He was such a relatable character! I enjoyed both Wayne and Em’s characters and thought they were pretty well realised in the story as well – also something that can get overlooked in urban fantasy.

I love that Sigmund dismisses Lain when he first turns up to work at the same place, because it meant that it wasn’t ‘love at first sight’. This is a trope that’s overdone and to me often seems to be lazy storytelling and writing, when it’s done well I notice but overall I prefer no instant-love. This meant that as the reader I got to enjoy Lain and Sigmund getting to know one another, enjoy Sigmund’s realisation that Lain was flirting with him and liked him! It was delightful and I became so invested in their romance as I got to watch it slowly unfold!

I loved the linking in with the Norse mythology and Loki, the villain and how the story unfolded, and the twist involving Sigmund and how he links into the mythology. I honestly can’t gush about this book enough, this was such refreshing and original urban fantasy that effectively delivered on a lot of what is my favourite parts of the genre – romance, but it’s delightfully queer – and as a queer reader it reads authentically to me, I could imagine having coffee with Sigmund and Lain as a couple.  Then there’s the mythology mixed up in the modern world – honestly I can’t get enough of it, and Franklin does an excellent job playing with both here. Basically, I adored Liesmith and I am really excited to read the second book in the series Stormbringer.

One thought on “AWW17: Liesmith by Alis Franklin”