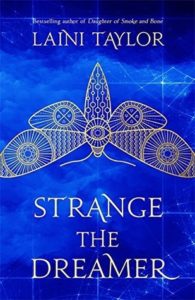 Publisher and Year: Hodder and Stoughton, 2017

The dream chooses the dreamer, not the other way around – and Lazlo Strange, war orphan and junior librarian, has always feared that his dream chose poorly. Since he was five years old he’s been obsessed with the mythic lost city of Weep, but it would take someone bolder than he to cross half the world in search of it. Then a stunning opportunity presents itself, in the person of a hero called the Godslayer and a band of legendary warriors, and he has to seize his chance to lose his dream forever.

What happened in Weep two hundred years ago to cut it off from the rest of the world? What exactly did the Godslayer slay that went by the name of god? And what is the mysterious problem he now seeks help in solving?

The answers await in Weep, but so do more mysteries – including the blue-skinned goddess who appears in Lazlo’s dreams. How did he dream her before he knew she existed? And if all the gods are dead, why does she seem so real?

In this sweeping and breathtaking new novel by National Book Award finalist Laini Taylor, author of the New York Times bestselling ‘Daughter of Smoke & Bone’ trilogy, the shadow of the past is as real as the ghosts who haunt the citadel of murdered gods. Fall into a mythical world of dread and wonder, moths and nightmares, love and carnage.

This was one of those books that I saw getting a lot of buzz, certainly the Booktubers I follow were very excited about it. And, who wouldn’t be with the gorgeous bright blue cover with gilded dragonfly? Even the gold and blue flecked cover was striking. It’s a book whose appearance begs you to pick it up and read it. And if that wasn’t enough, the blurb is fantastic and sucked me in. I’m new to Taylor’s work and I am really excited I got to read this book. What Taylor does here was really unique for me, there are certainly the trappings of epic fantasy but they’re used in really interesting ways.

I adored Lazlo’s character and enjoyed him as an unusual hero type, a dreamer where the story doesn’t really fit him but he’s there doing the best he can anyway. I loved his bookishness and his quiet dedication. I loved the whimsical fantasy of the world-building and the adventure, although honestly, Lazlo was one of the only characters I was attached to at all. Lazlo and Sarai, and I thought her short changed as a character. I struggled with the godspawn characters as the ‘them’ of the book entirely – they were too juxtaposed as both terrifying and dangerous and also helpless and trapped in a way that never really worked for me. Same with the band of experts gathered to attend the problem in the city of Weep, save the thief who took up the betting ring, they were unremarkable – I’d read much more of her story though.

That’s kind of where shine wears off for me, because although Lazlo was interesting and engaging. Although I empathised with Sarai’s empathy and loneliness, the story itself fell flat for me. I struggled with the plot, especially as it just seemed like there was so much more plot in the history of Weep than in the present, and it was horrific history and I found the way it was shared felt a bit wooden. I was told characters were traumatised and such, but I didn’t get that from the characters themselves. I also struggled with the romance between Lazlo and Sarai, I liked the premise but found the execution left me cold, I wanted more from them, more for them, and I find the ending of the book abhorrent. The interaction between all the characters save Lazlo and Sarai is flat and unsatisfying – it’s hard to care about what they’re doing and why.

The writing itself makes up for a lot here, it’s lyrical and paints such a beautiful picture while you’re reading that you don’t seem to mind the lack of substance. At least, that’s what I found for myself until I got to the end and I felt like I’d taken in so little for all the pages I’d read. Others have commented that they thought the pace a little slow in places and I’d also agree with that. I’m really glad I got to read this and my favourite part was how much of a whimsical dreamer Lazlo was, and that although he was happy in the depths of the library, he got to go on an adventure and explore the city of his dreams.

If you’ve enjoyed other works by Taylor, you’ll likely enjoy this book similarly. It’s a good read overall, though I’m left a little wanting – and not in the way you’d hope. It’s worth noting that there’s some heavy content in here, reference to rape and torture and forced pregnancy – it’s not gratuitous, but it’s there and I found it uncomfortable reading in the story – again it was part of the being told rather than finding out as the story unfolds more organically. Although I’ve had Taylor’s work recommended to  me several times, I’m not sure if I’m up for book 2 at this stage.