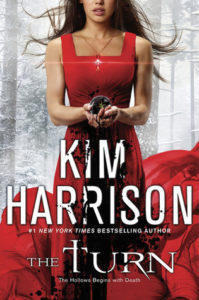 Kim Harrison returns to her beloved Hollows series with The Turn, the official prequel to the series that will introduce fans and readers to a whole new side of Rachel Morgan’s world as they’ve never seen it before!

Can science save us when all else fails?

Trisk and her hated rival, Kalamack, have the same goal: save their species from extinction.

Death comes in the guise of hope when a genetically modified tomato created to feed the world combines with the government’s new tactical virus, giving it an unexpected host and a mode of transport. Plague takes the world, giving the paranormal species an uncomfortable choice to stay hidden and allow humanity to die, or to show themselves in a bid to save them.

Under accusations of scientific misconduct, Trisk and Kal flee across a plague torn United States to convince leaders of the major paranormal species to save their supposedly weaker kin, but not everyone thinks humanity should be saved.

Kal surreptitiously works against her as Trisk fights the prejudices of two societies to prove that not only does humanity have something to offer, but that long-accepted beliefs against women, dark magic, and humanity itself can turn to understanding; that when people are at their worst that the best show their true strength, and that love can hold the world together as a new balance is found.

I’ve long been a fan of Kim Harrison’s Hollows series and so the opportunity to read the prequel about how the whole Tomato plague got started, and how the Inderlanders came out into the open was fantastic! I had always wondered how events had happened, and this prequel answered many of my questions. I think a bunch of those questions remain unanswered but the book is a complete story in its own right and there’s no cliffhanger.

I really empathised with Trisk’s character and the frustration of sexism and classism depicted in the story’s 60s timeline. It pings immediately believable as an alternative history timeline, and yet I can also see how things evolved to Rachel’s time and how much and how little changed.

I was especially interested in the story of the pixies and that their struggle against extinction was so fraught! It’s such a change from Rachel’s time! I appreciated all the ways in which the historical story came alive for me and made sense in my understanding of how the series itself unfolds for Rachel, Ivy, Trent and Al.

Al remains one of my favourite characters in that hate to love kind of way, I definitely want to read more of his story. Kal is… wow, at once an interesting protagonist, who isn’t ‘all bad’ but he’s so caught up in himself, his position and privilege that what sympathy I had for him was always fleeting. His ruthlessness was horrifying to me and the only thing that bothers me about the outcome of things was that he actually still ends up coming out of it relatively unscathed, while Trisk loses most everything.

Prequels can often be disappointing, but The Turn manages to be a fully fledged story in its own right, there’s plenty of story to tell and while it ties strongly into the beginning and history behind the series of The Hollows taking place, you can read it as a stand alone fantasy novel just fine I think. That said, I do think those who’ve also read some of the series will love it more.