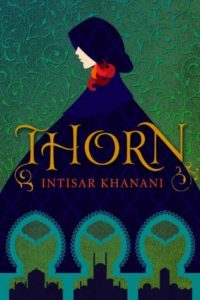 Publisher and Year:  Self published, 2014

For Princess Alyrra, choice is a luxury she’s never had … until she’s betrayed.

Princess Alyrra has never enjoyed the security or power of her rank. Between her family’s cruelty and the court’s contempt, she has spent her life in the shadows. Forced to marry a powerful foreign prince, Alyrra embarks on a journey to meet her betrothed with little hope for a better future.

But powerful men have powerful enemies–and now, so does Alyrra. Betrayed during a magical attack, her identity is switched with another woman’s, giving Alyrra the first choice she’s ever had: to start a new life for herself or fight for a prince she’s never met. But Alyrra soon finds that Prince Kestrin is not at all what she expected. While walking away will cost Kestrin his life, returning to the court may cost Alyrra her own. As Alyrra is coming to realize, sometime the hardest choice means learning to trust herself.

I fell into this book and devoured it pretty much in one sitting. I then bought all the other novels available by Intisar Khanani. This was excellent, the kind of fantasy story that is highly enjoyable, beautifully written and extremely rewarding to read. I’m not familiar with the fairytale that this retelling is based, but it definitely has a fairytale feel about the story that I appreciated.

I loved the way Alyrra navigated her circumstances and I absolutely love that there was no ‘instantaneous love connection’. Instead, Alyrra and Kestrin although they are intended to marry are divided by magic and their ability to even get to know one another is hampered. Where in other stories Alyrra’s inherent goodness might have seemed a little two dimensional, here her ability to cope with the changes in her circumstances are true to her character and growing up experiences. Although she has had an abusive upbringing, Alyrra herself is not broken, but does realistically demonstrate traits that show her mistrust and the effect her past has had on her.

Although Falada’s character is the most fanciful in the story, I love horses in fantasy stories and so I was wholeheartedly willing to go with it, and I am glad that Alyrra got to have a friend while she was finding her feet as a goose girl. I liked that Falada wasn’t omnipotent, or overpowered but merely another sentient race – magical to be sure, but bound by realities that meant Alyrra’s own future was in her hands. I loved that this was consistently reinforced to her. And more than that, I love the way that Alyrra was happy to consider giving up on being a Princess all together, and embracing her change in circumstance as a chance to start anew and have a life she though she would like better. I appreciated the emphasis of being royalty and the duty involved in that position – whether one wants it or not.

I also liked the way Khanani explored differing power relationships and consequences of privilege between Alyrra as the goose girl and Kestrin as the prince. It’s very obvious that he comes from the mindset that he doesn’t intend harm and wants to find the truth and so he is in the right, no matter what difficulty it may cause Alyrra. I also loved the exploration of conceptions of justice in the book – the King’s justice versus the Thieves justice – similar in that they have limited reach to a specific area of the population, but different in terms of flexibility and willingness to follow through on holding people to account.

For me the ending was a little rushed and I would have liked to see that fleshed out a little more, the encounter between Alyrra and the witch, their return and the consequences of that. However, I was also immediately sad that I couldn’t read on to see what happened next – I do hope there are more books in this universe at some stage. I loved that this story was about growing up, coming into one’s self, and exploring ideas of belonging, justice, and family. It was a delight to read, I highly recommend it for reading.