My interview with Stephanie Gunn is the second of the interviews I conducted for Snapshot 2016, reposted from the original over at the Australian SF Snapshot Project. #Snapshot2016. 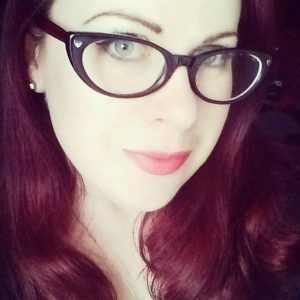 Stephanie Gunn is a speculative fiction writer and reviewer. Once upon a time she was a scientist, but life had other ideas, and now she spends her days surrounded in words in one way or another. She has had work nominated for the Aurealis, Ditmar and Tin Duck Awards, and is currently at work on several contemporary fantasy novels. She lives in Perth with her husband and son, and requisite cat, who cares not for books except as surfaces to sit on. You can find her online at stephaniegunn.com.

How would you describe your Defying Doomsday story ‘To Take Into the Air My Quiet Breath’ for people who may not know what to expect from an anthology about a dystopian future featuring disabled and chronically ill protagonists?

To Take Into the Air My Quiet Breath is a story about sisters who survive a devastating flu pandemic. The sisters consist of a set of twins, both of whom have cystic fibrosis—one of whom has had a lung transplant—and their older sister. The three of them initially survived the pandemic by going into isolation on a remote farm with their uncle and mother; both adults died after the pandemic, leaving the sisters to survive alone. 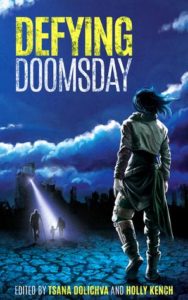 The idea for the story came from a long fascination with pandemics (I blame early reading of Stephen King’s The Stand, but I also have a background in microbiology and genetics, and had thought of going into epidemiology) and the idea of who would be likely to survive in a global pandemic. The idea is that the strong survive, of course, and those who happen to be immune, but what if that strength and/or immunity came with a chronic illness? And for that chronic illness to be something like cystic fibrosis, which requires an enormous amount of medical support, was an idea I couldn’t shake.

People with chronic illnesses and disabilities are taught to be survivors in this world, usually by necessity, and not always given the support and respect due to them. I wanted very much to show these sisters supporting each other, and in the end, to give them hope. To let them defy everything.

The main thing I’ve discovered is the sheer quality of the collections in the Twelve Planets. I read most of the first half of the Planets when they were released, and I knew that they were all good, but reading them back to back has really shown just how impressive they all are. We’re seven books in now, and there hasn’t been a single story or novella that’s been sub-par. It’s really put into perspective how damn good the female writers showcased are, and given me a whole new level of respect for Twelfth Planet Press and Alisa Krasnostein (and frankly, I already had an enormous amount of respect for both). 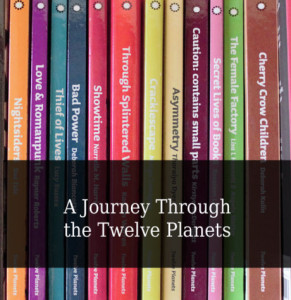 In your 2015 wrap up blog post you talk about writing goals and achievements in 2015, how is 2016 shaping up in relation to the goals and plans still on your list?

This has been a bit of a frustrating year for me. I’ve been focusing a lot on developing my skill as a novel writer, and learning as much as I can about story structure and outlining. I’ve always been a hardcore pantser, and I’ve wanted very much to streamline my methodology to—in theory—make novel writing a faster process for me. I’ve definitely moved very much to being an outliner now, but novel writing is still frustratingly slow. It takes me a fair amount of time to craft a short story as well, and for both I need many, many drafts, so I’m at the point where I probably just need to accept that mine is a slow process.

I had a lot of plans coming into this year. I wanted to outline and finish a first draft of a new novel, which has been extremely slow in coming. I do have about two thirds of a draft by now, but it’s been extremely frustrating, especially since I wanted to have this done in the first half of the year so I can redraft another novel, which is edging close to being submittable.

I’ve also had one short story published so far (To Take Into the Air My Quiet Breath, in Defying Doomsday), which I am incredibly proud of (and still, quite frankly, somewhat stunned to be published in that anthology!), and I have another novella forthcoming in Aurum from Ticonderoga Press. So it’s not a total loss, even though I feel like I’ve only accomplished a tiny fraction of what I wanted to.

All of the Twelve Planets collections read to date have been amazing, and I encourage anyone who hasn’t read them to pick up copies of them all. I was also floored by how amazing Lisa L. Hannett’s debut novel Lament for the Afterlife, as well as Louise Katz’s The Orchid Nursery. I’m biased, since I have a story in it, but Defying Doomsday, edited by Holly Kench and Tsana Dolichva, was amazing, and I want to make particular note of “Tea Party” by Lauren E. Mitchell. Illuminae by Amie Kaufman and Jay Kristoff, was also incredible, and I’m looking forward to the sequel later this year.

This is a tough one, mostly because I’m a massive introvert who would most likely be sitting with headphones in for the whole time! If I have to pick someone, it would probably be Kameron Hurley, just because of her sheer talent, grit honesty about the writing life. I think that would be a very worthwhile trip.