Glenda Larke is the kind of author that readers like myself adore, there are books and plenty of them in nice reassuring series with epic overarching storylines. There’s sweeping world vistas with magnificent histories and characters you’ve plenty of time to fall in love with. I’m so pleased that I had the chance to interview Glenda for Snapshot 2016. This interview is reposted from the Australian SF Snapshot Project. #Snapshot2016. 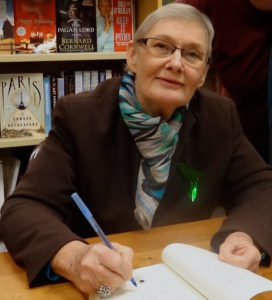 Glenda was born in Western Australia, on a farm where bathwater was pumped up from the Canning River and the dunny was across the back lawn, in an age when the radio was so large it stood on the floor and the family car had running boards you could hitch a ride on. She now lives on the coast just south of Perth — in the years between, she has taught English to engineering students in Tunisia and adults in Vienna, and worked on avifaunal conservation everywhere from the heart of Borneo to islands in the South China Sea. She has also published four trilogies and a standalone fantasy and has won multiple Australia awards. Her most recently published book, The Fall of the Dagger, brings The Forsaken Lands trilogy to a close.

Congratulations on your winning the inaugural Sara Douglass Series Award for your Watergivers trilogy! You are well known for the series you have written now, and as this award focuses specifically on series, what do you think makes a great series that is different from simply writing a great novel?

Winning was a tremendous thrill, unbelievable when I think of the calibre of much of the competition, and I take my hat off to the judges who had such an enormous volume of books to read. I wish could have been at the ceremony, but I was actually walking my newborn granddaughter up and down in New York at the time…

A trilogy, or even a long series like G.R.R. Martin’s Song of Fire and Ice, is actually just one very long book. That’s the basic difference: length. The Watergivers exceeded half a million words.

The length enables a writer to invent a world with a vast history and a panoramic landscape, colour it with magic and villainy, and then people it with a cast of characters of every hue, religious belief and social status. If it is well-written, it is wonderfully immersive for a reader in a way a shorter book cannot be. From a writer’s point of view, it’s maddeningly complex — like trying to weave cloth of a thousand hues without the aid of a loom.

A series can also be a number of short books with the same characters and a storyline that comes to a conclusion with the end of each book. Possibly that’s a tad easier, although I doubt it. Either way, those award judges had a tough task! 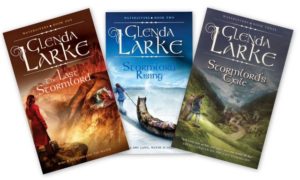 You were recently a guest for Supanova, what was your favourite part of the experience and did it give you insight into what Australian fans are reading and looking for?

Frankly, I love everything about Supanova. It’s such a circus of creative genius, a mix of writers, artists, film makers, actors and geeks and fans, a glorious hotch-potch of fantasy madness! The best part is simply sitting behind the writers’ desk, watching the costumed fantasy enthusiasts walk past and chatting to anyone who stops, whether they have ever heard of me or not. And if I have to describe Australian fans, it would be to say that they are a really varied lot and defy categorisation.

Now that you’ve concluded your ‘Forsaken Lands’ trilogy, are you able to give us a hint of any other project that we can look forward to?

I’m working on a new book, at a snail’s pace, I fear. (I don’t have a contract at the moment.) It’s tentatively called Redweaver Dawning, and it uses (and subverts!) the trope of the changeling, the stolen baby who ends up being the heir to the throne. That’s always seemed a very unlikely scenario to me, and I am having great fun with it.
What Australian work have you loved recently?

I’ve been reading some urban fantasy for a change: Keri Arthur’s Chasing the Shadows (lots of mayhem in San Francisco) and Alison Goodman’s Lady Helen and The Dark Days Club (urban fantasy a la Jane Austen). Also Ben Peek’s fantasy epic The Godless, which is a worldbuilding tour de force.

J.K. Rowling because that would mean I’d be travelling in first class comfort?

(Oh, I must say, I don’t like the idea of sitting next to anyone, author or otherwise, who’s dead.)

Ok, seriously: Ursula le Guin. Because. I mean, who wouldn’t want to share a journey with a SF author of such legendary status and strong moral positions?