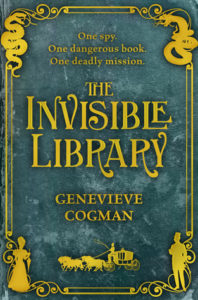 The first installment of an adventure featuring stolen books, secret agents and forbidden societies – think Doctor Who with librarian spies!

Irene is a professional spy for the mysterious Library, which harvests fiction from different realities. And along with her enigmatic assistant Kai, she’s posted to an alternative London. Their mission – to retrieve a dangerous book. But when they arrive, it’s already been stolen. London’s underground factions seem prepared to fight to the very death to find her book.

Adding to the jeopardy, this world is chaos-infested – the laws of nature bent to allow supernatural creatures and unpredictable magic. Irene’s new assistant is also hiding secrets of his own.

Soon, she’s up to her eyebrows in a heady mix of danger, clues and secret societies. Yet failure is not an option – the nature of reality itself is at stake.

I really enjoyed this book – it’s what you call a ‘rollicking good read’! The story and characters were just fantastic and hooked me from the beginning. I also love the idea of an inter dimensional Library with all the knowledge and spy librarians! Such an awesome concept and I’m delighted by the surge in books about libraries and librarians and how awesome they are lately!

In regard to this particular book and its story, I enjoyed the alternate London universe quite a lot, with magic being a likely threat and having to navigate unfamiliar politics – and without the resources one could usually expect. I’m very keen to see how the story continues and also whether we will get to peek into other dimensions and worlds that the Library is interested in!

My only thought is that the romance in this book was a bit clunky and I wanted to believe in it a little more from both sides. I’m hoping that element improves in subsequent books as the characters and story develops further. I think this is in part to Irene’s perceived immaturity – even though she has a quite extended lifespan, much of it has been spent in the Library confines and less being out in the world – or at least, that’s the only conclusion I can come to? I want a bit more growth from her overall. Kai plays the part of mysterious super-attractive side kick character really well – it’s not often the super-attractive character is the sidekick actually so that bit I particularly like.

I enjoyed The Invisible Library a lot and can’t wait to read more about the story and these characters! It was the right book at the right time – adventure and fantasy and just light and fluffy enough but also with enough depth to really have me enjoy the reading experience. Sometimes I think it’s as much the right book for the right mood/occasion as it is excellent writing/story/characters. The latter things are important, but if you’re not in the mood for a super crunchy thinky read then you’re not, and similarly if you want that and try to read something super fluffy, you’ll be disappointed. This book is not super crunchy, complex and deep – nor would I want it to be. It’s entertaining and full of adventure and All The Cool Things – because if you got to work for a magical library wouldn’t enjoying all the cool stuff be partly the point?