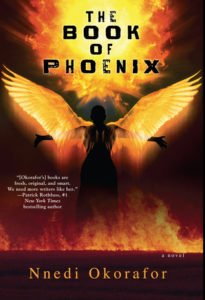 A fiery spirit dances from the pages of the Great Book. She brings the aroma of scorched sand and ozone. She has a story to tell….

The Book of Phoenix is a unique work of magical futurism. A prequel to the highly acclaimed, World Fantasy Award-winning novel, Who Fears Death, it features the rise of another of Nnedi Okorafor’s powerful, memorable, superhuman women.

Phoenix was grown and raised among other genetic experiments in New York’s Tower 7. She is an “accelerated woman”—only two years old but with the body and mind of an adult, Phoenix’s abilities far exceed those of a normal human. Still innocent and inexperienced in the ways of the world, she is content living in her room speed reading e-books, running on her treadmill, and basking in the love of Saeed, another biologically altered human of Tower 7.

Then one evening, Saeed witnesses something so terrible that he takes his own life. Devastated by his death and Tower 7’s refusal to answer her questions, Phoenix finally begins to realize that her home is really her prison, and she becomes desperate to escape.

But Phoenix’s escape, and her destruction of Tower 7, is just the beginning of her story. Before her story ends, Phoenix will travel from the United States to Africa and back, changing the entire course of humanity’s future.

Sometimes you get to read a book like The Book of Phoenix and simply go: Wow. What an incredible story. I couldn’t put this down once I started, it was such a compelling read. I loved Phoenix’s character and her self discovery as the story unfolds.  I love the way that this is a story of a dystopia, and yet is not without hope – it’s not so grim that I can’t bear to read. I wish more authors remembered the importance of emotional pay off with something like dystopias – you have to want something out of it, and for me that’s always some kind of emotional salve for the pain and awfulness experienced. The Book of Phoenix is a book about humanity and heroes, of saving and destroying the world

Another aspect of this book that I loved was its anger. There is such a profound rage that is a fundamental and crucial part of this story and its telling. This anger was part of what made the book so compelling but it wasn’t rage without focus, instead it was rage that both confronts and invites you to also be angry. And I was, and I revelled in it – not something I usually say about the experience of anger. The way anger works in The Book of Phoenix is masterful.

I also loved the other romantic threads that weave through the story. I loved Phoenix’s connection with Saeed and their romance together, it felt very real to me even though they are engineered beyond ordinary human constraints. I also loved that even after Phoenix though Saeed lost to her, she did not give up on love, but instead found it unexpectedly in a new place, in a new life she had created… even if that was a short lived joy it was also one that felt very real. That Saeed is returned to her is at no point twee, it makes sense and is believable – all of their interactions and conversations together are. I felt for them and breathed with them. Lastly, I loved the romance with the narrator in the beginning of the story with his wife as nomads and how his going off to wander was a part of how their love for one another endured. There was such a rich tapestry that explored love in this book – friendship, mother love, Earth love, and more.

I cannot say enough good things about this story, it’s one of the best things I’ve read this year, I highly recommend this – and I look forward to the other stories in this universe.