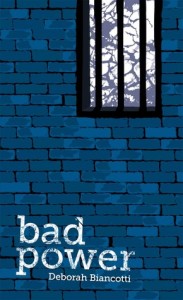 Hate superheroes?
Yeah. They probably hate you, too.

‘There are two kinds of people with lawyers on tap, Mr Grey. The powerful and the corrupt.’
‘Thank you.’
‘For implying you’re powerful?’
‘For imagining those are two different groups.’

From Crawford Award nominee Deborah Biancotti comes this sinister short story suite, a pocketbook police procedural, set in a world where the victories are only relative, and the defeats are absolute. Bad Power celebrates the worst kind of powers both supernatural and otherwise, in the interlinked tales of five people — and how far they’ll go.

If you like Haven and Heroes, you’ll love Bad Power.

I can positively say that the anthologies that utilise a shared universe in which to tell stories in a collection is one of my favourite ways to read short stories (whether novelettes, short stories, flash pieces, or novellas). Biancotti has delivered a very tight collection that weaves together beautifully. I almost didn’t like this collection much until I realised that I’d have lapped up every moment if it was in television form – and it’s like something clicked for me and I was in love.

I feel like in some ways these stories explore the idea of super-powers and the assumption that these encourage the emergence of heroes who do good in the world. Biancotti explores a more realistic and somewhat darker exploration of the idea of powers  – we’re all individuals after all, and not all of us are Superman, Wonder Woman or Batman. It’s not even like we’re all villains either – Biancotti deftly melts away the archetypes that go with the presentation of stories involving super powers and explores instead the ordinary ways of corruption, of getting by and are more about capitalism than making a difference to others. This is truly a unique exploration of super powers and a thorough dressing down of the idea of the super hero.

I would like to read more stories featuring Detective Palmer, who threads each of the stories, although I think they tie together in ways that are much more satisfying than her appearance alone. Her character interests me and her adventures in law enforcement, the weird cases she catches appeals to me a lot. She leaps of the page in a way that I love best from characters I read.

I think in this case I can’t look at the stories individually because it was only when I thought of them together in context that these stories came together as they were supposed to for me. I think this is partly that I’m less familiar with crime reading overall, especially gritty crime that tends toward the dark – this much more closely matches my television watching habits so that’s partly the lens through which I’m considering my review.

I didn’t find myself feeling sympathetic towards Grey or Webb as characters, the personality of Webb’s mother was quite chilling. I’m really sad that the old woman ended up dead – I was really taken with her character, and yet her death had weight and meaning for me as a reader – I missed her. It won’t surprise anyone who knows me that Crossing the Bridge was my favourite story of the collection – it brought a fulmination to Palmer’s character in connection with a character we’re newly introduced to, but who represents  the idea of optimism and that just because several people with powers are evil, jerks or simply opportunistic and amoral if otherwise benign, not everyone is and occasionally you get someone who really does want to make a difference, and has the power to do.

This is my first introduction to Biancotti’s work actually, and I really enjoyed the read. However, it is unlike anything else I’ve read before and sometimes that lack of familiarity meant I found it harder to slide into the story and immerse myself. I’m not much of a crime reader – particularly where it’s darker and a bit more gritty. However, the speculative element to this story really rounded it out for me as an experience I could really enjoy and trust in the individual narratives and their connection to one another to show me a good time.

Bad Power is another fantastic addition to the Twelve Planets series by Twelfth Planet Press and truly shows the versatility of the Press in the work it produces while maintaining a consistently high quality calibre of stories published. I have a not so secret hope that Biancotti may return to this universe, and in particular the character of Detective Palmer as I’d enjoy being able to continue reading about her adventures. That to me is really a sign of how much I enjoyed this collection – the world and its characters living beyond the reading of the last page.