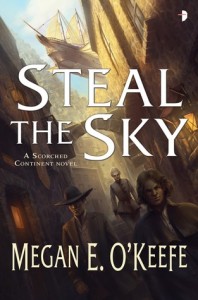 Detan Honding, a wanted conman of noble birth and ignoble tongue, has found himself in the oasis city of Aransa. He and his trusted companion Tibs may have pulled off one too many cons against the city’s elite and need to make a quick escape. They set their sights on their biggest heist yet—the gorgeous airship of the exiled commodore Thratia.

But in the middle of his scheme, a face changer known as a doppel starts murdering key members of Aransa’s government. The sudden paranoia makes Detan’s plans of stealing Thratia’s ship that much harder. And with this sudden power vacuum, Thratia can solidify her power and wreak havoc against the Empire. But the doppel isn’t working for Thratia and has her own intentions. Did Detan accidentally walk into a revolution and a crusade? He has to be careful—there’s a reason most people think he’s dead. And if his dangerous secret gets revealed, he has a lot more to worry about than a stolen airship.

This is a great novel filled with the grand adventures of an anti-hero with unlikely allies, amidst a fantasy-steampunk setting. The worldbuilding in this novel is fantastic, I really got a sense of the city of Aransa and its surrounds. Another reviewer commented that in some ways, this book reminded them of ‘Firefly’ – the doomed-but-fabled television series, and I have to say I can see the resemblance. It’s not exactly a space western but it is a fantasy-steampunk-western and so it has that similar feel about it.

At first it was Ripka whom I liked best – although I was thrown for a bit with the doppelganger impersonation of her for a bit. I liked Tibs immediately and was glad that we got a nice chunk of his story in this book and not just a focus on Detan. It took me a little bit for Detan, the main protagonist to grow on me, but he’s such an interesting contradiction of personality and the way he interacts with the story makes it twisty and fascinating. About the only character who had little impact on me was Thratia – as a villain she was a little two-dimensional and the other characters’ fear of her didn’t quite translate to me as the reader – maybe this will become more apparent with time, but I feel like her history is what made her scary, not her present activities in Aransa. Those who came after Detan from the Empire were more villainous than Thratia, who by comparison was just coldly political with an amoral streak.

I got a sense that in this first book we’ve barely begun to scratch the surface of those who are talented with sellium gas, and the ends to which those in power would seek to use and so it would seem, abuse, them. They were the real villains of the story and there’s some nice seeds of an epic story being told in this book. In this particular story, the focus is on Detan’s interactions with Pelkaia, the doppel. Pelkaia is highly skilled with her talents in using sellium, with a background in its use before it was commandeered as a protected resource for the Empire – all those talented with sellium are required to work in that industry, no choice involved and no way out (save death or injury). Pelkaia rebels against his, having worked the system herself and also lost her son to what she thought was an accident. The loss of her son compels Pelkaia to revenge, which is what has her cross paths with Detan, impersonate Ripka and seek to steal from Thratia.

This story had great layers to it – from the heist of the airship, Detan’s history, Pelkaia’s revenge for the death of her son, and how these all ultimately link together, there’s a lot to enjoy! Also, lots to dig into and it’s got great scope as a series – I’m really looking forward to the next book! If you enjoyed ‘Firefly’, like steampunk in your fantasy, or like adventure stories, heist stories, or stories about loyalty then this is well worth your time.

One thought on “Review: Steal the Sky by Megan O’Keefe”