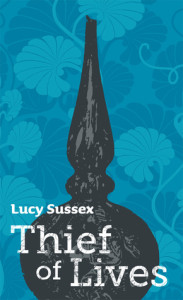 Why are certain subjects so difﬁcult to talk about?
What is justice?
Why do writers think that other people’s lives are fair game?
And what do we really know about the first chemist?

A story about history, women, science (and also the demonic); a crime story, based upon a true crime; a realist satire of the supposedly sex-savvy; and a story exploring lies, and the space between the real and the unreal. Welcome to the worlds of Lucy Sussex, and to her many varied modes.

Another really solid addition to the Twelve Planets collection by Twelfth Planet Press. This book wasn’t my favourite, but Sussex has been on my ‘to read’ list in my head for quite a while so I’m pleased to finally read some of her work. Overall I enjoyed this collection, but I didn’t fall into it the way I did with both Nightsiders and Love and Romanpunk. I do think this is a great introduction to Sussex’s work and her talent across different genres and styles of writing.

The first story in the collection is Alchemy, and it’s my favourite of the collection. I love Tapputi’s character, her quiet strength and being utterly grounded in her world. I love the observation of her throughout her life by Azuzel and how drawn he his to her and the potential he sees in her in a history-making sense. This is a story that I think demonstrates boundaries really well – in a kind of abstract but also literal sense. Azuzel makes an offer, after observing Tapput, she refuses and he respects her decision. He returns to observe her, still drawn to her ‘once in a generation’ mind and offers again – years later, and respects her again and possibly more when she still refuses. I definitely got the sense of Azuzel as an immortal entity wafting throughout time and history acting, interacting, observing but lacking earthly substance without that alchemical connection. Stories like this one are amongst those I particularly enjoy – the connection (romantic or not) between an otherworldly character and a worldly character (using broad definitions), it just presses a big emotional satisfaction button for me.

Fountain of Justice was an interesting story, and it didn’t really work for me but I did like Meg’s character. The story didn’t quite fulfil the premise for me, although I was engaged by the ideas behind the story – all of them separately were interesting, but I don’t feel like they came together as a whole in the end.  I did love the idea of the fountain being the agent of justice, and also that sometimes needs must and the official rules and version of things may be different from certain truths.

The Subject of O

The Subject of O is a story where I loved the premise and enjoyed the story but it didn’t get under my skin and it didn’t stay with me. On the surface, lots about this story is my jam – female sexuality, invisibility and uncovering the ordinary in society. But while I loved the way Petra considered female sexuality and orgasms, and the truth around communicating them (or not) with the person you’re having sex with, it was a bit meh for me. Maybe it’s simply that this is a subject in which I’ve thought and thought and over-thought, or that I’m not sure. It also occurs to me that the story is intended to be satirical and that tends to be hit and miss for me.

Thief of Lives is an ‘Inception-like’ story, it’s the story in which the title of the collection is taken from, and features a book of the same name within. That part tickles me quite a lot. Actually, I really loved the dark and urban style fantasy involved here and I think my real complaint with this story is that it was merely a taste and I wanted a novel with these characters, with this universe. It was really engaging although at times hard to follow, but overall really satisfying.

*A note for those tracking numbers, the 5th book I read for the Australian Women Writers Challenge was ‘Innocence Lost’ by Patty Jansen, but since I didn’t enjoy it I’ve only reviewed it on Goodreads.

One thought on “AWW16: Thief of Lives by Lucy Sussex (Twelve Planets #3)”