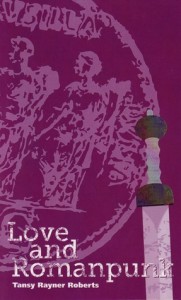 Thousands of years ago, Julia Agrippina wrote the true history of her family, the Caesars. The document was lost, or destroyed, almost immediately.
(It included more monsters than you might think.)

Hundreds of years ago, Fanny and Mary ran away from London with a debauched poet and his sister.
(If it was the poet you are thinking of, the story would have ended far more happily, and with fewer people having their throats bitten out.)

Sometime in the near future, a community will live in a replica Roman city built in the Australian bush. It’s a sight to behold.
(Shame about the manticores.)

Further in the future, the last man who guards the secret history of the world will discover that the past has a way of coming around to bite you.
(He didn’t even know she had a thing for pointy teeth.)

The world is in greater danger than you ever suspected. Women named Julia are stronger than they appear. Don’t let your little brother make out with silver-eyed blondes. Immortal heroes really don’t fancy teenage girls. When love dies, there’s still opera. Family is everything. Monsters are everywhere. Yes, you do have to wear the damned toga.

History is not what you think it is.

I like to think that I’m someone who appreciates history. I like to think I have an interest. If I’m honest, it’s an interest where I’m easily distracted and I’ve rarely taken the time or opportunity to dig deep into the history of something and really become immersed. So reading this collection by Tansy I see what comes out of the possibility of such immersion – where you come out the other side of what can be factually established, what is theorised, what evidence tells us (what little there is for women’s history at least), and into the realm of pure speculation. The result is glorious.

I’ve seen several comments about how this collection is what decided people on becoming a Tansy fangirl – and I can really see why! I am a fangirl already (the Creature Court series really hooked me). These stories, although set in the same overarching universe are distinct from each other and self contained. However they also create an overall narrative that is a joy in the unfolding as you the reader discover.

At first I was a little bit lost when I started this story, but I soon found my feet. I’ve got no familiarity with Roman history – beyond that Julius Caesar existed. Getting to read something of the family history of Caesar – heavily fictionalised or not was really interesting. I also love the way in which adding the supernatural and mythological elements to this family history also speculates about the nature of the history and the events surrounding the family. This was thoroughly charming as a story and I fell in love with the idea that being a ‘Julia’ was something special. How neatly is the context of women in Roman society explained here? We have the ordinary and the extraordinary contextualised alongside one another so beautifully, this particular thing I admire a whole lot.

Once again my lack of familiarity with the history where the story is set meant I was scrambling for a little while – I’ve no doubt if you’re familiar with the Wollstonecraft family history that there are additional layers of joyful discovery contained within this piece. It doesn’t disappoint if like me, you don’t have that background. Fanny and Mary are interesting, and I love this tiny look into their lives and of happiness in amidst the supernatural glimpsed. I’m a little enamoured of a vampire story from the point of view of being the food, the prey, the needed one. When this story ended I wondered how or if it would fit into the bigger context of the narrative begun in the previous story and though it’s subtle, looking back after finishing all the stories I can see and appreciate the links a whole lot.  I love the queerness in this story, the lush connection between Fanny and the Poet’s sister was so sweetly erotic, unapologetic and without guilt. And yet, also so very subtle – I loved it.

Here I hit my stride because we leave the past behind and instead we’re in a present day alternate Australia where a replica Roman City has been built and is staffed by residents for tourists who play the part of Romans. Here we meet Clea Majora, my favourite character in the book (though Julia Agrippina comes a very close second). I love the strange relationship that evolves between Clea and Julius, friendship, curiosity and discovery in between bouts of fighting monsters. I love the sense that the real world is never quite enough for Clea, and yet she’s not so restless that she needs to leave her daily life behind completely.

I love the idea that for once a woman at age fifty and above is still considered young, and that someone thousands of years old as Julius is presented to us, only starts to think of her as a romantic companion at that point – that she’s too young before. This trope is one that is abused most often and is often well and truly into creepy territory in modern urban fantasy. It’s not that it’s impossible, just that it is so often badly done, explained flippantly or explanations make it *more* creepy and not less. The evolution of Clea and Julius’ connection is my favourite part of this story. More urban fantasy romances spanning the ages like this please!

And here we have both a conclusion and a beginning. On the one hand, I feel like Clea should probably have known better than to leave artefacts of supernatural Roman history lying around easily picked up. On the other hand, it was all supposedly dealt with, so I don’t blame her too much. It was such a difference to see through Sebastian’s eyes the unfolding of this story, but also his memories of his grandmother Clea’s adventures and stories. I love that he’s resourceful and recognises an awesome Julia when he finds her. Not only does he find a Julia to help him to save the day from a Romanpunk themed airship filled with lamia descend upon the cities below to wreak havoc, but the original Julia Agrippina joins in through Sebastian in order to continue trying to set right the wrongs of her family and their history. This story brings together all the elements of the previous stories, winds them down and then leaves us with the kind of conclusion which is really just another beginning. That’s rather delightful actually as I could read Tansy’s portrayal of Julia Agrippina any day!

In conclusion, this collection was beautifully put together. It delivers a wonderful experience for the reader comprised of separate, bite-sized chunks of story while also creating a deeper narrative that threads throughout all of the stories. I learned something and I got to immerse myself in a world and characters that I loved fleetingly but deeply. This book is the second of the twelve books in this collection and like Nightsiders which I previously reviewed, it’s an exceptional addition to the project and is also a book that I’m calling one of my best reads of 2016. Yes, in February. I loved this book so very much – it reminds me that even though I’m a terrible student of history I love to appreciate others’ expertise in the field, especially when they create such fictional delights such as this.