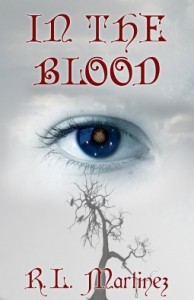 Title: In the Blood

The Warrior
The war between Dosalyn and Roanaan has ended, but a new battle begins for prisoner-of-war, Ottilde Dominax. Dreams of her witchbreed twin sister are visions of death and betrayal. Driven by their grim warning, she escapes her captors and races across nations to save her sister.

But she may arrive too late…

The Witch
Oriabel Dominax has kept her healing magic secret while she cares for her family’s struggling estate. But the arrival of a new lord with secrets of his own, the discovery of a dark and addictive magic, and threats from a cruel blackmailer push Oriabel closer to disaster.

Through it all, the Witch’s Tree calls…

Every so often you come across a book that reminds you why you love a genre, and Into the Blood really reminded me why I love reading epic fantasy. This story has two female protagonists who are so very different from one another, but united by sisterly love. Their story involves struggles that are generally outside of their control with real elements of sacrifice. I couldn’t put this down once I started and I cannot *wait* for the following book(s)! While reading this, I was reminded of Juliet Marillier’s writing and stories, the quality is lyrical, magical, mysterious and compelling.

I particularly identified with Oriabel, but I loved how forthright and determined Otthilde was! By contrast, Oriabel is optimistic and has a steadfastness that serves her well in service to her community – even though they don’t appreciate her. Hito seems almost too good to be true as a character, but his flaw in rushing to believe the worst of Oriabel balanced that somewhat, and also shows the relative immaturity of their relationship at the time. I am also keen to discover more about the villain and their grand plan to lead Otthilde and Oriabel astray – the end of this book was quite the conclusion and it is self contained, but in that ‘first step in a journey’ kind of way. I am eager to see  what happens next!

While this book has strong characters and an engaging plot, the worldbuilding is a little sparse and I didn’t really get a sense of the realm in which Oriabel and Otthilde lived, or the distance the latter travelled. I have some understanding  of the political context of the story, but not actually how the two realms are divided on a broad scale or on the scale of the local populace. Also, the war seems to be quite important but I don’t remember discovering what the point of the war at all was aside from a general urge toward conquest. I hope that over the next book(s) that the worldbuilding improves and becomes clearer – I can sense a potential for more that I don’t think was quite achieved in this book. I did get a much stronger sense of Oriabel’s community, it’s size and how it fit together.

This was a great start to a series and is a great addition to the epic fantasy genre.