So 2015 is the year where I finally realised that I do like reading crime/mysteries afterall (although my youthful penchant for Trixie Belden should have clued me into that). I don’t like true crime or scary, gritty, thriller or true crime books, I like entertaining mysteries and crime – crime with fluff and even better if it’s fantastical and speculative. The Spindle City Mysteries are a most excellent example of what I’m coming to recognise as my taste in crime/mysteries. These stories are set in a universe of classic fairytales and have a noir feel to them, with a side of comedy to round them out. 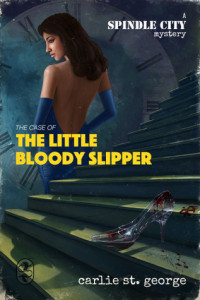 “It was half past eleven when I saw her. She was standing at the top of the staircase, with restless fingers and defiant eyes, wrapped in blue silk that clung to her hips.”

Jimmy Prince is a private detective with a tendency to make bad decisions, take on hopeless cases, and ask too many questions. But no one is answering his inquiries about Ella, the mysterious dame who slipped into the Prince family gala, stayed for a dance, then disappeared at midnight leaving just a single bloody glass slipper behind.

With the help of his trusty assistant Jack (a street-savvy teen runaway who is as tough as she is resourceful), Jimmy finally catches a break when one of Spindle City’s most powerful players, the Godmother, lets slip that Ella is part of a much larger conspiracy and not at all who she seems. With every new clue, Jimmy finds himself a step farther down a path that threatens to uncover some of the city’s best kept, and most deadly, secrets.

In Spindle City, all kinds of tales get told… for a price. Asking the wrong question is a guaranteed one-way ticket to the long and silent ever after.

Taking on this new case might just be Jimmy Prince’s biggest mistake yet.

The Case of the Bloody Little Slipper caught my eye when I wanted to read and support more short fiction publishing and in particular wanted to support Book Smugglers Publishing. Fairytales in a noir crime setting sounded interesting and so I gave it a try. The cover itself drew my interest looking very reminiscent of Cinderella, but also hinting toward the noir style of the story. From the first I was transported into the universe of Spindle City, because the language was so markedly difference. This took a little getting used to, and some guessing at times but it was worth it and I felt immersed in the life of Jimmy Prince trying to solve the mystery of Ella.

I love the idea of ‘Prince Charming’ actually being dysfunctional, not too pretty and although that idealistic moral standard is definitely present in Jimmy, it’s definitely sarcastic and a little tarnished. Jimmy was a great protagonist to explore Spindle City along with his sidekick Jack whose story I’m really intrigued by! Ella as the disenfranchised, disinherited orphan is beautifully retold, retaining the mystery of the original fairytale while also giving her greater depth without the singular romantic focus. This story was refreshing and I just let myself enjoy the mystery unfolding – I’m less about guessing where mysteries and crime solving stories are going, and more about enjoying the ride.

St George has created a solid foundation in The Case of the Bloody Little Slipper with the Spindle City universe and I enjoyed every moment and couldn’t wait to read more! 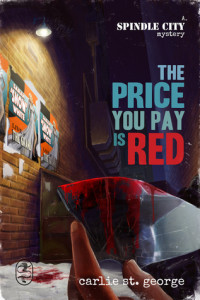 Title: The Price You Pay is Red (Spindle City Mysteries #2)

“All women are dangerous,” Rose said. “Anyone underestimated is.”

When Jimmy Prince–excessively stubborn gumshoe and maker of terrible life choices–stumbles on the corpse of Spindle City’s darling actress and heiress Sarah “Snow” White, he and street-savvy sidekick Jack are once again on a case that threatens to expose ugly truths from Spindle’s dark underbelly. Turns out Snow’s death is no ordinary open-and-shut case involving something as mundane as a jealous coworker or spurned lover. Her murder points to a much deeper, insidious plot that involves some of Spindle’s biggest criminals–as well as some of its greatest, most celebrated citizens.

At stake is a rumored vaccine that could save thousands of lives from the Pins & Needles plague–a disease for which there is no cure, and that has already affected Jimmy’s friends and family in irreparable ways. But as Jimmy Prince knows all too well, hope is for saps, and The Spindle is not a city for those who believe in happy endings. Even when they want to, above everything else.

While we first met Sarah ‘Snow’ White in The Case of the Bloody Little Slipper, she wasn’t much part of that story and I hoped that St George would revisit her story later on. Wish granted! (Just like a fairytale really, complete with bitter edge). A story focused on the Snow White of Spindle City, but unfortunately she’s dead – and why? The impression we’d received in the first book was that she was something of a shallow actress, out to make a living and thumb her nose at her stepmother (lovely nod to the fairytale there).

Here in The Price You Pay is Red we discover there’s more to Sarah than we thought, and yet this is bittersweet because Sarah is already dead. We learn more about the ‘Pins and Needles’ disease that has ravaged Spindle City and that Sarah was likely killed because of something she had to do with a potential vaccine to the fatal wasting disease. This is near and dear to Jimmy’s past based on his own historical relationships.

Overall this  book was much less fairytale retold and much more noir crime  mystery, but that’s not a criticism, it brings that genre to life for me in a way that I may otherwise have never appreciated. Lovely continuation of the Spindle City mysteries. 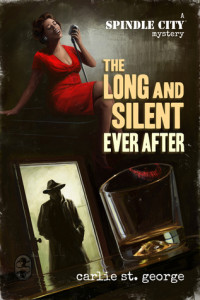 Title: The Long and Silent Ever After (Spindle City Mysteries #3)

“Hello, Prince,” the Godmother said. “I’m calling in that favor.”

When Rose Briar–cabaret singer, drug lord, and notorious secret-keeper–disappears without a trace from her club, The Poisoned Apple, Jimmy Prince and Jack are on the case once again. This time, the duo may have bitten off more than they can chew, as their investigation drags them into the path of the Spindle’s greatest and most formidable criminal–one who got her nickname for her tendency to burn her enemies alive.

It doesn’t help that Jimmy is having a hard time focusing on the case, torn between his head’s desire to do the right thing, and his heart’s insistence for that one person who always has three gats, a pen, and a smile at the ready.

But in Spindle City, the long and silent ever after waits for no one–and it’s Jimmy’s turn to dance with dragon.

How awesome are the titles for these mysteries? So freaking awesome. The titles alone make me want to read these books – that happens less and less I find, so I’m especially charmed. While this is the last of the Spindle City mysteries currently planned, I sincerely hope that this changes and that there are more to come because these stories are so wonderful and entertaining to read! I want to enjoy this unique universe and its characters for several books to come – this is truly a great candidate for an expanded universe.

I love that queerness, partnership and friendship feature strongly in this book – more so than romance or rather the romance is subtle, it’s not the main focus but it’s sweetly there to enjoy. I love that this book features more of Rose Red and also the Godmother – who in this universe is not the benevolent creature we’re used to. This story has more intrigue, more adventure and we also see Jimmy deal with his own pride, illness and mortality.

If there had to be a book where things ended (or more hopefully paused) then this is a great book to do that. The story satisfies and you get to feel like you’ve gotten a really good taste of what this universe and its stories are all about. I love the way in which Carlie St George has so beautifully created this noir fairytale sub-genre, the quasi-gritty stylised noir aspect maps surprisingly well to traditional fairytales and they come to life in a whole new way. (Am I the only one who thinks this would also make a great television adaption?) Congratulations to St George and Book Smugglers Publishing on a truly awesome series of books, I enjoyed them so very much and am recommending them far and wide.