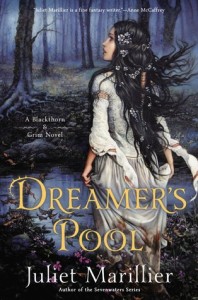 In exchange for help escaping her long and wrongful imprisonment, embittered magical healer Blackthorn has vowed to set aside her bid for vengeance against the man who destroyed all that she once held dear. Followed by a former prison mate, a silent hulk of a man named Grim, she travels north to Dalriada. There she’ll live on the fringe of a mysterious forest, duty bound for seven years to assist anyone who asks for her help. Oran, crown prince of Dalriada, has waited anxiously for the arrival of his future bride, Lady Flidais. He knows her only from a portrait and sweetly poetic correspondence that have convinced him Flidais is his destined true love. But Oran discovers letters can lie. For although his intended exactly resembles her portrait, her brutality upon arrival proves she is nothing like the sensitive woman of the letters.

With the strategic marriage imminent, Oran sees no way out of his dilemma. Word has spread that Blackthorn possesses a remarkable gift for solving knotty problems, so the prince asks her for help. To save Oran from his treacherous nuptials, Blackthorn and Grim will need all their resources: courage, ingenuity, leaps of deduction, and more than a little magic.

Somehow I thought I’d already reviewed this book, but I was mistaken and so you’ll see that I reviewed the second book first, oops! This is a brilliant new series from Marillier, such an interesting premise that engages with promises to the fae, with rebuilding a life, with building friendship and community ties, learning to trust again while recovering from deep betrayal. This book has it all and this series is full of promise.

Blackthorn is an interesting protagonist, she’s not young, nor beautiful, she has no optimism and indeed seemingly places little value in her life or what is to come. Watching her wrestle with the desire to live and the struggle that keeping bond with the fae lord in exchange for his help in saving her is fascinating. Watching her engage cynically but with candid truth – with herself and with Grim grabs you from the first and makes you want to know more of her story, makes you feel for her in all her pain, and also makes you hope for her, that she can grow and heal from her past. Grim is more of a mystery in this book, though it’s clear he’s suffered and has little thought to his own future except looking after Blackthorn. Watching the beginnings of this friendship grow is truly satisfying and the platonic way in which they become companions is unique and so refreshing. I love romance, but I think that friendship is also an enduring and wonderful thing to explore in fiction and I want to see more of it.

The mystery that Blackthorn and Grim come face to face with is two fold, one mystery is something of an opportunity for the credibility of their teamwork and problem solving to be established, but also for them to come to the notice of the local ruling lord Oran. And here is where there is a lovely romance that sets the tone for the book – and my heart just went out to Oran with the struggle he had with meeting Flidais, not knowing why or how she’d changed so much between the letters they’d exchanged and her arrival overshadowed by tragedy. The letters exchanged between Oran and Flidais were so delightful and one of my favourite aspects of the book! I thought that the way in which the mystery of Flidais’ unfolded wonderfully – I wasn’t absolutely sure what had happened until the last, though I did guess it had to do with the pool in the forest. The story was so satisfying and it was a wonderful introduction to characters I will enjoy reading about for any following books in this series.