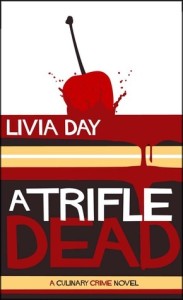 Tabitha Darling has always had a dab hand for pastry and a knack for getting into trouble. Which was fine when she was a tearaway teen, but not so useful now she’s trying to run a hipster urban cafe, invent the perfect trendy dessert, and stop feeding the many (oh so unfashionable) policemen in her life.

When a dead muso is found in the flat upstairs, Tabitha does her best (honestly) not to interfere with the investigation, despite the cute Scottish blogger who keeps angling for her help. Her superpower is gossip, not solving murder mysteries, and those are totally not the same thing, right?

But as that strange death turns into a string of random crimes across the city of Hobart, Tabitha can’t shake the unsettling feeling that maybe, for once, it really is ALL ABOUT HER.

It wasn’t until earlier this year that I discovered that I like crime novels just fine if they’re not too serious, not too horror filled, and about good winning out over the baddies. The Café La Femme series delivers exactly what I want out of a crime and mystery novel, with extra delicious dessert geekery on the side. A Trifle Dead is a great title and play on words, Tabitha Darling is a brilliant protagonist and a character that I just want to make friends with so much! And not just because being friends with her would involve tea and cake! (Although do you need more reasons?)

I’m in love with the Hobart setting, with the café and the various people that Tabitha knows and spends time with. I love that she accidentally ends up chasing the mystery of the dead muso in the apartment above her cafe, and the way her way with people, including the fact that she seems to know everyone, works for her ability to get to the bottom of things. And, it’s not like she means to get in trouble… but she’s also usually quite good at getting herself out of it, but when she’s not, her friends (some of them are police) are there to help.

The writing in this book just lets you melt into the story (like icing in your mouth, really) and I was swept up into it and barely noticed time passing until all the pages were done. This book was sweetly romantic and with great friendships and emotional engagement, but it was also funny – and I laughed out loud a few times. Entertainment, an interesting mystery that I enjoyed watching Tabitha unravel, characters I adore, a setting that makes me long to visit Hobart spun together with writing that is just gorgeous. I can’t recommend this book (and this series) enough – I hope there are so many more books to come! 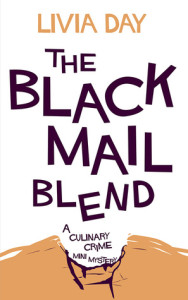 This shouldn’t be a recipe for mayhem and murder, but Tabitha Darling has been burned once before and she knows the signs that she’s about to fall into another crime scene.At least she doesn’t have to worry about love triangles any more. Right? RIGHT?

I was so bereft with the ending of the first book – you know that feeling, where the book has ended and there’s no more story left to read! I very nearly went back to the beginning again, but this novella staved off this need and provided that extra helping (of dessert of course) to get me through. Gosh I love these books! Also, how can I not love books that make me want to review them using as many dessert references as I possibly can?!

I was so amused at the whole idea of a romance writers retreat crime mystery that I was almost beside myself with amusement! And then there was Tabitha’s high tea discovery, plus her very own tea blend. Favourite characters return in this and I can’t be the only one who wishes it was a full novel and not a short, but maybe I’m just wishful…

I loved how Tabitha tried as hard as possible to not do any kind of mystery solving or detecting, and that trouble found her anyway. I also appreciated that the events of the first book are still having an impact on her life, how she goes about things which plays into how this mystery unfolds. As with the first book, the resolution of things is not clear cut but is tied up nicely leaving you well and truly satisfied with everything, and wishing you had a high tea like Tabitha’s of your own you could go to.