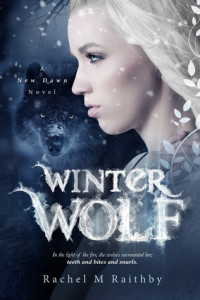 Katalina Winter was prepared for life to change when she turned eighteen—but she never expected to actually change.

Learning that her birth parents were purebred wolf shifters is shocking enough. Now she’s expected to take her place in their unfamiliar world. Caught between two warring packs, Katalina must learn fast. One pack, led by the father she has only just met, wants to control her—and the other one wants her dead.

However, there is one bright spot to shifting, and his name is Bass Evernight. Tall, dark, and oh-so-handsome, Bass is the wolf that Katalina craves. He’s also strictly forbidden: a member of Dark Shadow, Bass is the son of her father’s mortal enemy. Yet deep down inside, Katalina’s new primal instincts howl that Bass is her mate. Can their love bring an end to the brutal war that has raged for so long, or will it spark the fighting around them into an all-consuming fire?

If like me  you have a taste for the kind of urban fantasy that has a romance bent to it but is largely fluffy and entertaining, this book is a great choice. I liked the way that the romance began, although it was an instant connection it was one that fitted the characters involved. I found that the romance was quite heavy handed in how it continued – way deeper and more committed and permanent seeming than really makes sense for the age of the characters, particularly considering what Katalina was going through.

I enjoyed this story but was uncomfortable with how Katalina’s adoptive parents were essentially fridged to make way for the story – I think there are plenty of ways the story could have happened that didn’t involve fridging the inconvenient set of parents to give Katalina  motivation for her story. That said, I thought the way the story handled Katalina’s grief, the importance of her parents to her and how her extended adoptive family treated her was well done. I appreciated the way that her birth family handled her reintroduction to them badly – several times, but that Katalina never let them get away with the bad behaviour and called them on it. I like that she won’t be told how her life is going to be and who it’s going to be with. This book is a nice contrast to some of the other YA romance books I’ve read of late in that it had good examples of boundary setting, healthy relationships – both romantic and non-romantic. It’s not problem-free, but it was a damn sight better than what I’ve come across and I appreciated that a lot.

I like that both Bass and Katalina are uninterested in the feud and it’s continuation – they may be in the honeymoon phase of their relationship but it does make sense with how they want things to be better in their respective packs so they can enjoy being in love together. I’m disappointed that any sense of life or ambition outside of the pack for Katalina seems impossible once she finds out she’s a wolf shapeshifter – surely the prospect of college and a career isn’t so ridiculous? Katalina has an independent nature and I think it would have been very much in her character to still want to go to college and explore her options.

This was a quick urban fantasy read that was very enjoyable, it avoided making a bunch of mistakes in relationship dynamics in the romance that I’ve seen too often and hate, but the setup of the story and the romance weren’t without issues that should be examined critically. Overall this was an enjoyable and satisfying fluffy read.