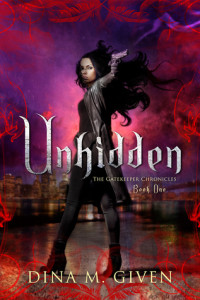 It’s not always easy to differentiate between the good guys and the bad guys, especially when your heroine is a trained killer and she may be falling in love with her evil hunter…

Emma must use every skill in her arsenal to stay alive as she tries to solve the mystery of why she has been targeted. Her list of enemies keeps growing – from Zane Shayde, an evil Mage, to a secret branch of the US government – and she doesn’t know if there is anyone left she can trust.

To complicate matters further, Emma is inexplicably drawn to Zane in a way she doesn’t quite understand, even knowing her life is forfeit if captured. Who is he and why does he have this affect on her? How can she fight a being that calls to her, body and soul?

Emma is left haunted by questions, doubts and fears as to why she has been targeted, when they will come for her next, and how she will possibly be able to survive against an enemy she doesn’t understand.

Unhidden is a straight up urban fantasy and it’s a great solid read. Emma is an interesting protagonist, she’s independent and smart, interesting and not a people person. I like the way the story unfolds – there’s a lot of action and you don’t get the explanation all at once, you figure it out as Emma figures it out.

The supporting characters were also interesting, I liked that there wasn’t actually a romantic triangle between Emma, Alex and Zane – but that they are connected from the past and that this past still keeps them looking out for one another, even if Zane has been brainwashed by the enemy and works for them. I like that Emma’s romance with Zane comes largely from memory, and I like the way that was shared with the reader – nothing creepy happened and it sucks that I need to say that but it’s true.

Emma is competent and skilled in her story and that has to be one of the things I like most, at no point is her skill played down, her experience – she plans and organises and strategises, she owns the weapons cache. All of this sets up the context of the story where Emma still doesn’t know what’s going on or why things are happening as they are better, she’s  not weakened as a protagonist, she doesn’t become a puppet. I also like that she doesn’t go off by herself to work alone, she recognises her allies as such and respects them – even if she’s also clear she doesn’t trust them.

I found the action and the execution of the plot really satisfying in this book, things didn’t come too easily, the ‘big bad’ wasn’t defeated easily and there were costs, consequences and moral quandaries. This book incorporated a bunch of what I really enjoy about urban fantasy, in an entertaining package that wasn’t too heavy. This is exactly the kind of book and series I read during semester because it doesn’t demand too much of me, and instead gives me the chance to escape, enjoy and fantasise.