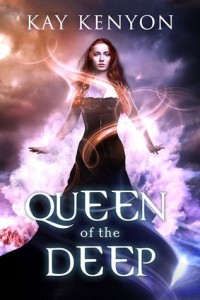 Title: Queen of the Deep

On the streets of New York, Jane Gray meets an intriguing man who claims to be the impossible: an imaginary playmate from her childhood: Prince Starling. Determined to know the truth, Jane tracks him into another realm.

This is the world of the Palazzo, a magical ship which is both a colossal steam vessel and a Renaissance kingdom. Ruling over its denizens–both human and otherwise–is an exotic and dangerous queen. Jane must find her way home, but the path is hopelessly lost.

Promising romance, the enigmatic Prince Starling and big-hearted crime lord Niccolo vie for Jane’s heart. But she has her eye on the pilot house. Who–or what–guides the Palazzo, and what is the urgent secret of its endless voyage? As a shocking destination looms into view, Jane must choose both a lover and a ship’s course, one that may avoid the end of all things.

The start of this book from the point of view of a child-Jane Gray was fantastic and I got hooked quite quickly. The next part of things where Jane is an adult before the rest of the story really starts to get going is a a little clunky, it threw me out of the story a little bit until Jane finds herself in Palazzo and then I was back in as deep as before.

I really found the world of Palazzo to be interesting – a cruise ship, where everyone has been convinced by their leader that it’s not a ship at all is fascinating! As is the way the social systems on Palazzo – it was so intriguing to read about and watch Jane navigate them.  The story was well developed and executed, but the characters at times weren’t quite all there for me – I wanted a bit more development from them to really enjoy how they were in their world(s) – particularly Jane’s friendship with her best friend – it’s not quite all there, you’re *told* it’s deep rather than shown and I thought that was the case for other aspects of character and relationships too – like Niccolo de Citta not being the scoundrel he was initially painted.

The story and worldbuilding make up for some of the ways in which this book seems clumsy.  At times I thought this was a YA story because of the narrative flow and the writing, but it’s not really geared toward being a YA book. It’s almost a fairytale, but it never quite succeeds at that. The overarching story is intricate and I enjoyed the unravelling of the mystery and the resolution a lot.

I enjoyed this book and it was a light and entertaining read. If you like the kind of fantasy that has an urban touch but isn’t really within that sub-genre this is a great read. The central protagonist is likeable and her determination is admirable. My favourite part  of the book was still the beginning, I don’t think the book quite lived up to the promise of that beginning, but it was well worth reading.