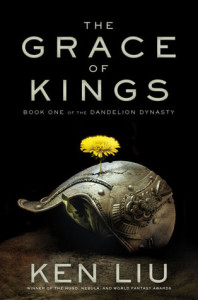 Publisher and Year: Simon and Schuster, 2015

Two men rebel together against tyranny—and then become rivals—in this first sweeping book of an epic fantasy series from Ken Liu, recipient of Hugo, Nebula, and World Fantasy awards.

Wily, charming Kuni Garu, a bandit, and stern, fearless Mata Zyndu, the son of a deposed duke, seem like polar opposites. Yet, in the uprising against the emperor, the two quickly become the best of friends after a series of adventures fighting against vast conscripted armies, silk-draped airships, and shapeshifting gods. Once the emperor has been overthrown, however, they each find themselves the leader of separate factions—two sides with very different ideas about how the world should be run and the meaning of justice.

Fans of intrigue, intimate plots, and action will find a new series to embrace in the Dandelion Dynasty.

I’ve fallen out of the habit of reading epic fantasy, but it’s still a genre I really delight in. I delighted in this book an awful lot – Liu’s writing is something to truly behold. His prose is beautiful, careful and paints the story he tells vividly. I love the sweeping majesty of the story, love the long ranging story that unfolds over decades – it was magnificent! While I rolled my eyes at Mata’s character often, I really enjoyed reading Kuni’s point of view and his conflicts within himself as he is carried along by the story, much like the dandelion he identifies with. The plot and intrigue of this book are intricate and deadly – absolute power and the ambition for it, the having of it and the outcomes of all of it.

Because all of the characters are so deeply invested in their states, their people, their vision you as the reader become invested and attached to the fate of all of it. I was really drawn into the ruler-vision scale of things, and particularly from Kuni because he also always maintained understanding of how power impacts on the individual. Being afraid of the power you hold, what you can do with it and the responsibility – Kuni is an excellent example of someone wrestling with all of these things and wanting to the best he can.

I felt so let down by this book because there was such a lack where female characters are concerned. And the lack is not because Liu is unskilled in the way he writes them, just that they come across as an afterthought at best. Kuni appreciates the women in his life and in society generally – better than his various counterparts certainly and yet it makes my teeth hurt because it’s a bit heavy handed and comes across as though ‘cookies’ are being sought for having an insightful male character who ‘realises women are people too’ and this takes place throughout the book when there simply could have been female characters – any of the awesome ones we meet late in the book.

We followed Mata and Kuni’s life from childhood we didn’t do that for Jia, we don’t meet Soto until later, Gin Mazita also doesn’t enter until later.  Any of these point of views alongside the two male protagonists would have been amazing, because as characters they were amazing and so were their stories! It’s so heart rending. It’s worse in some ways than the complete lack of characters – it’s like salt in a very old wound that remains raw and open.  And Princess Kikomi? What a fucking raw deal she got! I was so excited when I first started to read about her, and then before we’d even gotten into her part in the story she’s fucking dead and forgotten.

Books like this are so hard to review because what disappoints is a deep hurt and it colours the entire experience of reading and the wonderful things you enjoyed are less memorable and shiny. So I’m left overall with an experience of ‘meh’ when in many ways this book was extraordinary, inspiring, and a deep abiding reading experience. Except for the way the female characters featured, it’s not a minor point but a major one that sours the whole performance. Which is also to say that while I really enjoyed reading this book overall, I was also content with where it ended, happy with that ending as a total resolution and I don’t think I’ll be picking up the next books in the series (not without some serious recommendations from those I trust anyway).