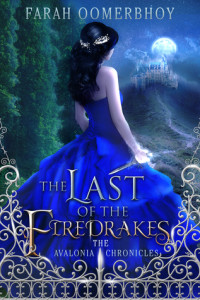 16-year-old Aurora Darlington is an orphan. Mistreated by her adopted family and bullied at school, she dreams of running away and being free. But when she is kidnapped and dragged through a portal into a magical world, suddenly her old life doesn’t seem so bad.

Avalonia is a dangerous land ruled by powerful mages and a cruel, selfish queen who will do anything to control all seven kingdoms—including killing anyone who stands in her way. Thrust headlong into this new, magical world, Aurora’s arrival sets plans in motion that threaten to destroy all she holds dear.

With the help of a young fae, a magical pegasus, and a handsome mage, Aurora journeys across Avalonia to learn the truth about her past and unleash the power within herself. Kingdoms collide as a complicated web of political intrigue and ancient magic lead Aurora to unravel a shocking secret that will change her life forever.

I really enjoyed this book, it’s a great debut novel from Oomerbhoy and I look forward to the release of the rest of the series. The Last of the Firedrakes is a magical coming of age story, it’s filled with adventure and fairytale majesty complete with a pegasus. This book reminded me a lot of the Alanna books by Tamora Pierce – the same kind of over the top magical elements, but done just right so I don’t mind that the protagonist is super powerful, pretty and endowed with all kinds of special-ness. Aurora’s story is interesting right from the beginning, and although she’s thrust into a world she had no idea existed, she starts to learn the ropes pretty  quickly.  Things come together for her, sure, but she navigates conflicts and adverse events herself and in her own way – I really like that. I loved that she made mistakes and learned from it, I love that she grew as a person and went from scared and freaked out to being able to contemplate her role in Avolonia.

I also quite enjoyed the teenage romance feel of things, it didn’t quite come across as ‘instalove’ the way it can often do in young adult books, particularly YA fantasy, instead it was like a teenage crush that hit, and then unfolded bit by bit, complete with finding out that the other person does indeed ‘like’ you that way too. It was cute. I was pleased at Aurora’s emotional maturity as the story progressed and her feelings for Rafe grew. In finding out that a genuine relationship in the open was impossible she sticks to her principles and boundaries – more books should do this. While I don’t think this romantic plot is finished by any means, I hope they don’t end up together, I hope that this is one of those times where choosing the right thing is hard, doesn’t really feel great and you wonder. I wish more YA books explored complicated ways in which romance  and relationships happen – this is a good start and I hope it continues that way.

I read this book as I finished studying for and sitting my end of semester exam and it was a welcome joy to read, lighthearted and uplifting, optimistic and very much forces of good seeking to triumph for the good of all, with their help, over forces of evil which seek domination. This book is the perfect description of a sometimes food – a reward, sweet, satisfying and beautiful – but not something you’d subsist on. I find it a little harder to get into epic/high fantasy style books these days – in theory I love them, but they’ve disappointed me so often in the past. This book definitely doesn’t disappoint and it gets me excited about fantasy, magic, dragons and castles again which is a lovely feeling.

I also love the way that, even though Aurora is a long lost princess, has super-powerful magic, and is striking if not beautiful, she has flaws, there are consequences for her mistakes, the bounty she discovers in herself doesn’t magically ‘fix’ everything and sometimes causes more issues and it seems to highlight that message that the grass is not always greener, and that beauty and power are not the be-all and end-all. At least, that was one of the things I took away from the book, because Aurora is also always trying to be a better person, she tries to give people the benefit of the doubt even when they’re unkind, she treats people around her well regardless of their status/position – not perfectly, but she’s still a teenager and still figuring things out – that shows and the whole package is awesome.

This is not a book of twists or surprises, you get exactly what you expect from this fantasy story about a girl who finds out she’s a long lost princess. This isn’t a bad thing, this is one of the strengths of the book – you can just enjoy it and trust that it’s going to deliver this experience, perhaps even exceed your expectations. Where it could perhaps do better is that all the characters present as able-bodied, neurotypical, and straight. The implications of racial elements are hinted at with discussion of how the fae are treated, but it’s not looked at in any real depth, although there is potential for this. This book with this kind of fantasy plot is not a surprise or a revelation, but it takes what you expect from this story form and delivers it with an awesome teenage protagonist that you enjoy cheering for.

Last of the Firedrakes was such a joy to read.

4 thoughts on “Review: Last of the Firedrakes by Farah Oomerbhoy”