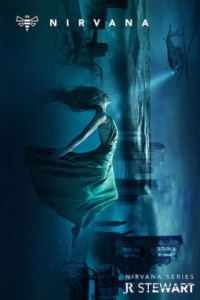 When the real world is emptied of all that you love, how can you keep yourself from dependence on the virtual?

Animal activist and punk rock star Larissa Kenders lives in a dystopian world where the real and the virtual intermingle. After the disappearance of her soulmate, Andrew, Kenders finds solace by escaping to Nirvana, a virtual world controlled by Hexagon. In Nirvana, anyone’s deepest desires may be realized – even visits with Andrew.

Although Kenders knows that this version of Andrew is virtual, when he asks for her assistance revealing Hexagon’s dark secret, she cannot help but comply. Soon after, Kenders and her closest allies find themselves in a battle with Hexagon, the very institution they have been taught to trust. After uncovering much more than she expected, Kenders’ biggest challenge is determining what is real – and what is virtual.

Nirvana is a fast-paced, page-turning young adult novel combining elements of science fiction, mystery, and romance. Part of a trilogy, this book introduces readers to a young woman who refuses to give up on the man she loves, even if it means taking on an entire government to do so.

I loved the sound of this book, and I love the cover art. It’s gorgeous. I also really love the premise and synopsis – this is a great example of a book that captures the interest of the idle browser.

I liked the book and enjoyed reading it, the unique dystopian view is compelling and interesting, I liked the world building and would enjoy reading more in this world. Stewart has done an excellent job presenting a possible future governed by corporate interests over civil governance and environmental disaster. I thought that it was a little confused as to the fact that the ‘Enemy’ and the war was a propaganda campaign, but once that became clear I stopped wondering why the story was one-sided and why I hadn’t seen any interaction with the so-called enemy yet.

The narrative about the corporate secrecy, control, and profiteering is what worked best with this book, this element of the plot worked brilliantly. Unfortunately, it’s hard to connect with Kenders as a protagonist because despite her being the first person narrator of the story, she remains largely presented only through the eyes of the other male characters. From her dead husband, to the Corporal, her long time best friend Serge.

What affects connection with Kenders the most is that her crushing grief leaves her one dimensional – everything is about Andrew and it becomes much more his story, despite his absence than Kenders’. I also didn’t like the creepy control interaction going on with Serge trying to ‘protect’ her but also manipulate her into accepting a deeper relationship with him. I could do with much less creepy relationship dynamics in general in YA books – but since they’re a real threat every day I can get past that, but not without seeing better, healthier dynamics demonstrated – and relationships with dead/missing partners doesn’t really count for that. I really loved the setup of the book, the setup of the romance, Kenders and her band, Andrew trying to get to know her and get past crappy one-liners. I like how they connected and spent time together, and how the love between them blossomed was gorgeous! What I didn’t like is that by the time the present-day story takes place, that romance has subsumed all of Kenders feelings and personality – I know from the first part of the book that she’s not cardboard, but sometimes it’s hard to remember that. I don’t feel like she got to be as awesome as she was set up to be.

I really wanted the intrigue of the story to take me deeper and to bring Kenders out of her grief, have her discover more, and act on the knowledge she uncovers, the book focuses too much on the romantic plot element which to a point is satisfying and believable, but becomes forced and takes over what is really engaging and interesting about the story. I wanted to know more about Nirvana, about Hexagon, about how things got the way they are and what the other secondary characters like the Corporal, the psychologist and Serge think of things – it was there, but I wanted more of that and less of Kenders’ pining. Also, her familial backstory as a motivator is relevant but it was dwelt on in a way that I didn’t find that relevant to the central story. The presentation of this dystopia seems highly plausible, but other than Andrew’s disappearance I wonder what the big threat is – is it further environmental catastrophe and even scarcer resources, is it from Hexagon? Throughout the book that remained unclear to me.

While some books get by purely on characters, this book relies heavily on plot, which Stewert executes deftly. I’m left wanting answers to questions raised by the book and I look forward to the next book.