An eARC of these books was provided by the publisher via Netgalley in exchange for an honest review. I do have to note outright that I do not recommend these books, they are problematic in ways that are never resolved. It’s not romance, it’s rape culture with badly drawn tropes. These are directed toward a YA market, and given my issues with the story and characters, find this quite disturbing. 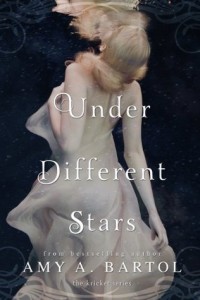 Kricket Hollowell is normally not one to wish upon stars; she believes they’re rarely in her favor. Well versed at dodging caseworkers from Chicago’s foster care system, the past few years on her own have made Kricket an expert at the art of survival and blending in. With her 18th birthday fast approaching, she dreams of the day when she can stop running and find what her heart needs most: a home.

Trey Allairis hates Earth and doubts that anyone from his world can thrive here. What he’s learning of Kricket and her existence away from her true home only confirms his theory. But, when he and Kricket lie together under the stars of Ethar, counting them all may be easier than letting her go.

Kyon Ensin’s secrets number the stars; he knows more about Kricket’s gifts than anyone and plans to possess her because of them. He also knows she’s more valuable than any fire in the night sky. He’ll move the heavens and align them all in order to make her his own.

When everything in their world can be broken, will Kricket rely upon love to save her under different stars?

Kricket is an interesting heroine, although seems to hit all the tropes for both looks and intelligence, plus a hard-luck past. Still, I like the way she engages, like the way the story begins. The writing tends toward info dumping, and it’s a bit slow in places, filled with tropes but not well done. I love tropes done well, but a lot of these made me cringe. Overall I quite liked the alternate universe in which Kricket finds herself. I read this because I was invested in her struggles (despite the make up of her character – although that was tempered somewhat by the fact that apparently that’s run of the mill in this alternate universe. Yes, I’m applying ‘handwavium’* with abandon here).

I kept reading this book (and the subsequent ones) because of some of the more disturbing plot elements and relationship dynamics that I hoped would be addressed. Relevant to my review for this book is the way that Kricket doesn’t seem to be able to make choices for herself and she ends up in various situations that aren’t great because of others’ who make decisions on her behalf. It’s very overtly gender essentialist although Kricket says all the right things about demanding independence – practically all the characters she meets who are male fall over themselves to be with her or have sex with her, and few end up having any genuine respect for her. Add that to the overdone over-protective streak of some of the characters once they decide she’s not the enemy and that they actually like/love her and want to look out for her, it doesn’t sit well. Kricket may not be a damsel in distress, but the other characters in the story try very hard to put her in that box.

And although in her own voice she rails against this – it’s frustrating to read. It’s also not an example I’d like to pass onto young people about how to navigate that kind of thing. Secondly, the development of the romance between Kricket and Trey is frankly unbelievable, I didn’t get the connection between them much at all – healthy respect and even friendship the way the other soldiers treated her, sure. But not romance. And on that note, while I’m good at handwaving and I’ve definitely done so for relationships I found problematic in other books, this romance didn’t sit right with me because of the differences in power dynamics as well as age and experience. Age and experience I can overlook in various contexts if it’s handled well, but I don’t think it was here and as such it came across as creepy – if less creepy than Kyon’s obsession with Kricket.

Overall I kept reading because I desperately wanted to read how things were addressed, dealt with, acknowledged, how Kricket empowered herself and what she did to get there. I could absolutely have gotten behind that. But… that’s not what happened in the first book. So I went onto the second, hoping that it was a bigger story building into something I could enjoy more and appreciate better. 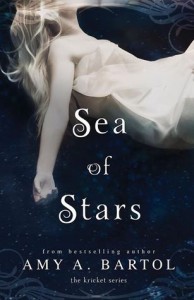 Eighteen-year-old Kricket Hollowell was looking for her place in the world when she discovered that the universe was bigger—and more dangerous—than she had ever dreamed. Now, whisked across space to the planet Ethar, Kricket learns that her genetic ability to see the future makes her a sought-after commodity…and the catalyst for war between her star-crossed parents’ clans. According to Alameedan prophecy, one house will rise to power and the other will be completely wiped out, and Kricket’s precognition is believed to be the weapon that will tip the scales.

A target of both the Rafe and the Alameeda houses, Kricket finds protection—and a home—in the arms of Trey, her Etharian bodyguard-turned-boyfriend. But her visions of what’s to come disturb her deeply, especially since she must discover whether the gift of foresight will allow her to rewrite the future, or if her fate is as immovable as the stars.

Book 2 of this series starts off looking up, but I felt like by the end it doesn’t really go anywhere. There are some nice character interaction moments, and I liked that Kricket got to save everyone once. I enjoyed that Kricket’s meeting with Charisma – Trey’s ex partner – was positive, although it did come across as a little saccharine. Also what the actual fuck is with the patriarchal nature of this worldset? It’s not actually worse than Earth on Ethar, but some of the overt views are really crap and again… it’s not something I’d want to give to other young adults as an example of dealing with this kind of stuff.

Aside from the few moments early on where Kricket gets to save herself and the others, she remains very much a commodity and I feel like this fact is reinforced well and truly above and beyond what is necessary. I don’t feel like her companions were effective in objecting to her status as someone seen as a commodity by others in their world. Also, in the end she ends up in the hands of the violent sociopath Kyon anyway. And is coerced into being a reluctant informant. I read speculative fiction because there’s enough of the real world to deal with on a daily basis, but this is straight out of something in my news feed. It’s nasty and insidious and is presented as though Kricket is a heroine for dealing with things, Kyon is presented as being insane but also as something of an antihero to sympathise with, Giffen is out to use her straight up – but at least he’s honest about it. Kricket’s so-called father is essentially meaningless in the story and the writing failed to give me any investment in the war at large overall – it was too impersonal and Kricket’s experiences were largely too removed from the war happening for it to be meaningful.

Again in reading this book I was left with a desperate sense of wanting it to be part of a larger story where Kricket gets to triumph for herself and the nasty, insidious, rape culture aspects of the story would be owned and dealt with in some way I could stomach. It didn’t happen, but I proceeded to the third book hoping, because it does read as though there’s a build up to some momentous event. 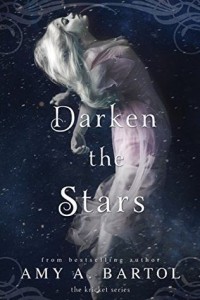 Kyon Ensin finally has what he’s always wanted: possession of Kricket Hollowell, the priestess who foresees the future. Together, their combined power will be unrivaled. Kricket, however, doesn’t crave the crown of Ethar—she has an unbreakable desire to live life on her own terms, a life that she desperately wants to share with her love, Trey Allairis.

As conspiracies rage in the war for Ethar, Kricket’s so-called allies want to use her as a spy. Even those held closest cannot be trusted—including Astrid, her sister, and Giffen, a member of a mysterious order with a hidden agenda. But Kricket’s resolve will not allow her to be used as anyone’s pawn, even as the Brotherhood sharpens its plans to cut out her heart.

As the destiny prophesied by her mother approaches, Kricket will backtrack through her fiery future to reshape it. For she knows one thing above all else: the only person she can truly count on is herself.

I very nearly did not finish this book because the rape culture and romanticising of domestic/intimate partner violence was a significant part of the story throughout most of the book. It sat really uncomfortably with me. At this point having invested two previous books, I was quite invested in Kricket as a character (having long handwaved the badly drawn tropes of her character make up), but it was just grim to read – and not in a good way. It’s like watching some of the worst elements of society unfold before you, but painted in pretty colours as though it will hide the ugliness. Plenty of people think these books are the best ever, that they’re super romantic and so on so clearly that’s worked but I’m reading this with constant discomfort.

I liked that Kricket managed to escape with another of the priestesses back to Earth. The ending is both satisfying and leaves me with a bad taste in my mouth – it’s not the empowerment I’d wanted for Kricket, but it is freedom and one she’s chosen. At no point do any of the relationships that Kricket is invested in really come through for her, not her sister, not her father, not Trey or the soldiers, certainly not Kyon. It’s just her surrounded by a whole lot of betrayal and sacrificial expectations. I feel like Kricket both simultaneously rejected and embraced the martyrdom of the story outcome, it’s part of the bad taste I think.

I doubt this is the end of the series, but I doubt I can be convinced to read any others. I can deal with this ending and write this whole experience of this series off as a bad idea, and evidence that just because you can read a book, and just because you hope that it will all come out in the wash, doesn’t mean you should read it, doesn’t mean the crap will be addressed. I should know that already, but apparently it’s one of those lessons you need to learn more than once.

I do not recommend these books at all. They do not take you to a good place, they do not leave you in a good place. They are not good examples of pretty much anything for young adult readers. The tropes are badly drawn and anything interesting is overwhelmed by the creepy rape culture factor. I’ve gone to the trouble to share my reviews and write up this post because I think it is incredibly important to challenge problematic things and to say what’s not okay about them.

*Handwavium refers to my ability and perceived need to handwave elements of something that I either find unbelievable, out of place, badly used tropes, or sometimes even offensive. (If I stopped watching and reading anything that was problematic well, I would read and watch very little, and that’s not how I roll, considered criticism and engagement for the win.)

One thought on “Review: Kricket Series by Amy A. Bartol, books 1-3”