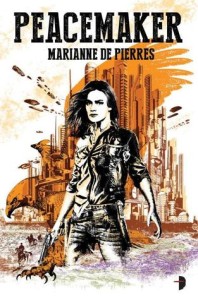 Virgin Jackson is the senior ranger in Birrimun Park – the world’s last natural landscape, overshadowed though it is by a sprawling coastal megacity. She maintains public safety and order in the park, but her bosses have brought out a hotshot cowboy to help her catch some drug runners who are affecting tourism. She senses the company is holding something back from her, and she’s not keen on working with an outsider like Nate Sixkiller.

When an imaginary animal from her troubled teenage years reappears, Virgin takes it to mean one of two things: a breakdown (hers!) or a warning. Dead bodies start piling up around her, so she decides on the latter. Something terrible is about to happen in the park and Virgin and her new partner, U.S. Marshall Nate Sixkiller, are standing in its path…

Marrianne de Pierres takes  urban fantasy and societal downfall in a unique and intriguing direction. I’m such a huge fan of this author and both her versatility and intricacy in storytelling. ‘Peacemaker’ is visionary, it’s so different and marries elements that remind me of space opera, with urban fantasy unlike anything we’ve seen before, intermingled with elements of the old Western pulp stories with stunning results.

One of the interesting things about this universe is that it’s all believable. It absolutely makes sense that in the future setting of this book, there is just a supercity and one lone Outback reserve. The rest of the details on what remains of Australia and indeed the rest of the world is a little sketchy, there’s hints about it but there’s no global picture offered. The mythologies intermingled in this novel are engaging, and very little is let slip by the author – this is a taste test where we discover the existence of these unknowns from another reality, what is fact and truth remains blurry.

Virgin Jackson is a brilliant heroine, she’s both fallible but has strength of character that draws you in. I found Nate to be equal parts mysterious and coy and I really want to know more. Caro’s friendship with Virgin makes her real, brings that three dimensional experience to the characters and the events of the book that really bring them to life – that’s the role of a good secondary character and Caro is masterfully written. All the peripheral characters leave an impact and this is unusual, more often they’re forgettable. In ‘Peacemaker’ I can still hear Papa Bise’s voice in my head and I can picture Kadee Matari in my mind like a photograph, even Virgin’s boss Bull Hunt leaves a lingering impression. These are the kind of characters that I am invested in and would read about over and over again.

I love that the futuristic landscape is recognisably Australia, and yet also seems to be so very alien as well. So close and yet so far is the only way I can describe it; everything is just within the boundaries of recognisable so it doesn’t seem like it could possibly be that far away – but the societal and environmental consequences create a cognitive dissonance because such vast changes don’t seem possible in any kind of short time frame. The effect discomforts the reader even as it draws them deeper into the intricate storyline.

The plot for ‘Peacemaker’ is beautifully layered and it unfolds carefully, not giving too much away. Always the events and experiences of the characters draw you in a little deeper you wonder what happens next. Even if you can guess the succession of events, the motivations and reasoning behind them remains obfuscated.

I devoured this book in one sitting, I couldn’t put it down and I’m already eagerly counting down to book two. If you like urban fantasy, unique heroines and intricate plots I highly recommend this book for you.