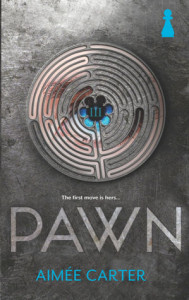 For Kitty Doe, it seems like an easy choice. She can either spend her life as a III in misery, looked down upon by the higher ranks and forced to leave the people she loves, or she can become a VII and join the most powerful family in the country.

If she says yes, Kitty will be Masked—surgically transformed into Lila Hart, the Prime Minister’s niece, who died under mysterious circumstances. As a member of the Hart family, she will be famous. She will be adored. And for the first time, she will matter.

There’s only one catch. She must also stop the rebellion that Lila secretly fostered, the same one that got her killed and one Kitty believes in. Faced with threats, conspiracies and a life that’s not her own, she must decide which path to choose—and learn how to become more than a pawn in a twisted game she’s only beginning to understand.

I finished this book this morning while on my way to do yet more wrestling with a government organisation about my worthiness to study, to make something of my future that doesn’t include welfare and whatever job I can get at any given time. So this one kind of hit me right between the eyes. I really identified with Kitty, and the antics of the family in power also rang true to me – from that outside perspective wondering how they can be so blind and also knowing that for some of them at least, the privilege is no picnic.

And yet, privilege is privilege, regardless of how that status gets defined and that doesn’t get diminished just because there is struggle. I thought that the book demonstrated the difference between personal struggle and systematic oppression really well actually – and did so in a way that didn’t single out any particular group in terms of skin colour or lifestyle etc. It’s still worth noting that the family in power are white and conventionally attractive, and there are no notable characters of colour in the book. Similarly, no mention of any queerness. The aged and those with disabilities are essentially disposed of wholesale and I think the way that happens as an arbitrary line demonstrates very obviously that there’s an issue with discrimination at hand – hopefully that makes other readers question the way people who are older and people who have disabilities are treated in the here and now.

The book is a YA gem, and sophisticated enough for adult readers to enjoy easily – and indeed I think they’d benefit from reading this book. It’s a book about the state of society and that’s always a subject worthy of consideration and comparison – fiction to the real, the near-future of the book, to how things are now.

This book was easy to read, it flowed nicely and neither gave too much away nor hid things away and obfuscated too much – reveals happened at points that made sense and enhanced the overall story narrative. I’m really looking forward to the next book.