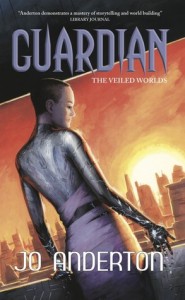 The grand city of Movoc-under-Keeper lies in ruins. The sinister puppet men have revealed their true nature, and their plan to tear down the veil between worlds. To have a chance of defeating them, Tanyana must do the impossible, and return to the world where they were created, on the other side of the veil. Her journey will force her into a terrible choice, and test just how much she is willing to sacrifice for the fate of two worlds.

I didn’t enjoy the second book ‘Suited’ nearly as much as I enjoyed the first book ‘Debris’ but this third book ‘Guardian’ was excellent and for me, really brought the series to a satisfying close. More than that, it further contextualised and in some way added  meaning to the events of book two, that I hadn’t gotten from that book itself. I loved the worlds crossing, loved the character interaction and connection – even across worlds.

I also think this is one of the more interesting stories to deal with a pregnancy and unusual circumstances – it reminds me a little of the Marianne de Pierres’ ‘Sentients of Orion’ series. Tanyana as a character really extends in this book, she’s a far cry from the ‘woe is me’ from the first book, and resentfulness of the second book. I love her evolution and I also love that the story centres around her, and not the rebuilding of the city or a majestic war – those are fine things, but I like that the story was character driven from beginning to end and that the surrounding events are always interpreted through the character perspective.

Congratulations to Jo Anderton on completing this series so beautifully.

I originally posted this on Goodreads because I was short on time, so I’m rectifying an oversight by posting the review here as well.