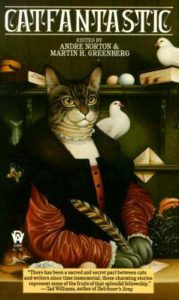 This anthology is beautifully put together as a hardcover with thick paper and it’s one of those books you enjoy the physical feeling of reading. The book boasts 15 stories with an interesting table of contents. The anthology features predominantly female author names, with three or four gender ambiguous names as well. There are a variety of protagonists, some human, some cat, some male, some female – a nice balance that reads well.

In her introduction, Andre Norton discusses the “weighty subject of cats” (vii) and what she suggests is an affinity between them and writers. She points out that it is because the cat is known to be mysterious, at times imperious and well known to live by their own (non-human) standards that makes cats such a fascinating subject for story telling. Certainly if this anthology is anything to go by, I find myself agreeing with Ms. Norton. She summaries the book as “fifteen histories [that] deal not only with spells but also with diplomatic relations on other planets, with forbidden research, engineering on a grand scale and with guardians who know their duty and expertly do it” (viii).

I’m not usually one for short story anthologies, although every so often I come across an anthology sufficiently seductive enough that I cannot resist. Perhaps it is that I am cultivating entirely positive experiences with short fiction so as to get past my general unenjoyment of it in the past. In any case, a book entirely composed of books about cats is an easy sell for me, I couldn’t resist if I tried. This anthology has an overall quality that left me very satisfied and when I realised that there were four more anthologies by the same editors about cats, I ordered them immediately.

Note: This is a long review, even though I’m only discussing the stories that I particularly liked or particularly noted.

“The Gate of the Kittens” by Wilanne Schneider Belden

This is a story of Feathers the pregnant cat, dark magic, time crossings, a brave and compassionate librarian Judith Justin who can drive a Bookmobile confidently through a raging storm. This is a quirky kind of story, the kind about saving the world where no one else really knows that’s what’s happened.

I love the friendship and the general acceptance of things out of the ordinary that Judith exhibits. I love that the’s an ordinary and solitary woman travelling through mountains with a Bookmobile, self sufficient and all around competent. Judith is a very likeable person and the story is believable in part because her own reasoning and intuition is emphasised.

I enjoyed the story, it was sweet and satisfying – though I also wouldn’t have objected to a novel length stand-alone story with this premise. This story was an inviting beginning to the anthology, I definitely wanted to read more.

“The Damcat” by Clare Bell

The Black Canyon dam project is the setting for this story told by Dale Curtis, an engineer, who meets Mike, a Native American Indian man from the Hopi tribe and his bob-cat partner Tonochpa. The friendship formed between Mike and Dale is interesting, they come from vastly different backgrounds and belief systems. Yet, they form a trust and respect for one another such that a critical issue with the dam is able to be fixed when all three of them bobcat included work together to solve the problem.

This is a story involving a non-white character who commands respect, rather than the white protagonist saving the day it is instead thanks to the actions of Mike and his partner Tonochpa that make the vital difference with the support of Dale. That their actions saved the lives of many and ensured the strength and structural integrity of the dam remains a quiet achievement between them. I find myself liking these quiet stories of heroism where it is enough that those involved know what happened rathe than seeking public acclaim.

This story read a little clunky in places, and as a white person I am unsure how well the story of a non-white person was handled but my impression of it was positive, if anyone else has thoughts on the story on this particular aspect I’m interested to hear them. This wasn’t a favourite story, but it was quite different to the other stories in the anthology and I wanted to talk about it.

This story is very much the kind of story that makes me want a series of books set in this world with these characters. The story was one of my favourites and it in some ways reminds me of Tamora Pierce’s characters and her worldbuilding. I also have a fondness for boy protagonists who are a little bit arrogant and full of themselves, and learn to be a little bit less so in the process of growing up, retaining the snarky charm. Agnarr is such a character, obviously the bane of the Meistari’s life and yet a great hopeful as a wizard student with lots of talent (but very little patience).

Agnarr befriends Skuggi, a cat travelling with another wizard who tells him the battle-scarred cat is too much for him to handle, but the cat is determined and so it goes that Skuggi joins company with Agnarr. The key to having a familiar is to discover their true name, a feat that Agnarr stumbles on but proves to be his saving grace when a vendetta against the Meistari is uncovered. The story is well written, easy to read and really endeared me to it.

“Day of Discovery” by Blake Cahoon

Another favourite, this story is about Lyssa a scientist completing her thesis. It is a science adventure and romance, involving a Guardian cat named Einstein. Her recently deceased professor and ex-lover has stolen credit for her research work on other dimensions and molecular transference and Lyssa is fighting with her friend David’s help to be able to complete it. This is a simple story but it’s effective and enjoyable – there’s not much else to say without spoiling it. This is another story that made me want more of a novel, again not in a bad way.

Another epic-fantasy style setting, this story was also up there with my favourites told from the point of view of Yellow Eyes the cat. Yellow Eyes leads an ordinary sort of life for a cat in a castle, things get a little bit different for him when he unexpectedly befriends a new and foreign dog who has joined the castle hunting pack. There is a mysterious jewel and the sage advice from the White Cat who is the companion of a spell weaver. Together the animals manage to save the castle, it’s a journey well worth reading. This was a beautiful story, perfectly rounded out into an ending that has the rare compliment of making me feel satisfied with exactly how the story was told and ended.

“It Must Be Some Place” by Donna Farley

This particular story was near the top of the list of my favourites from this anthology. It’s a story that reminds me a little of Pratchett books, and I would *love* to see this as a full length novel or a series of them – there’s plenty of material to play with. The story itself I could easily see as a novel (and one I’d lovingly reread at that). This is the story of Jack, a lost sock and Butterfly the tortiseshell tom who knows his magic and helps Jack to recover the lost sock. I don’t want to give too much of the story away, but I loved the band of characters as they come together. I also really enjoyed both Jack and Butterfly as protagonists. Definitely one of the top stories for this anthology in my opinion.

A story like this is remarkable in the subject it undertakes and the way it handles that subject. Dory is a child from an unhappy home and it falls to her cat companion Trouble to help her. The story is a small one, but it is deft and has a sweetness to it that I enjoyed. Trouble’s decisiveness and imperious way of helping Dory and looking after her is endearing, Dory herself is an interesting character though we only begin to get to know her. This is another story which would have been well served as a novel exploring the bigger story that’s been hinted at. That said, the small story was still satisfying in it’s way.

This story was also delightful, I loved the simplicity of the tale and how delightfula pair Dick and Skitty are. I loved this reworking of the cats hunting pests story – I’ve read it in a couple of children’s fairytales and I liked this version just as much. This was perfectly contained within a short story, it was just a pleasure start to finish.

I should mention that the other stories were a pleasure as well, most of them were very solid and only one or two left me with very little to say or recommend about them. Likely as not, that’s personal taste talking. I’ve stuck to the stories I liked best or noted most for another reason for this review, as being a collection of stories it’s a long review. This was the simplest way to contain it. I hope that you’ll take a look at the collection if you can get your hands on it, the editors have done themselves proud and the contributing authors as well. I say this as someone who doesn’t generallly enjoy short stories, specifically that this collection was well worth my time and effort.