I watched ‘Tangled’ for the second time this morning and it was just as good to watch the second time around as the first. It’s a movie that has been constructed in such a way as to not present as either a ‘girl’s’ movie or a ‘boy’s’ movie, the balance is pretty solid story and character wise in that sense. Looking at it with a feminist and cultural analysis lens, it comes out pretty damned favourably. I will admit that I was surprised how well it does. 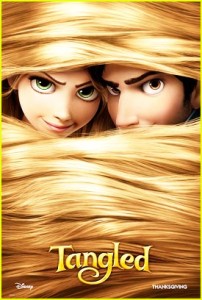 Overall it was a very well balanced movie, well written, good action sequences and pacing with character and plot development sequences. It was a movie where there was a likeable central female protagonist who was handy with a frypan (as a weapon) and surprisingly self-sufficient having been raised in a tower away from the world for eighteen years. The interpretation of the story by Disney was simple and effective hitting all the high notes of the traditional fairytale.

From a non-tokenism point of view, it passes the Bechdel test very early on with exchanges between Rapunzel and Mother Gothel. Both the character of Rapunzel and Mother Gothel are believable. Focusing on the latter for a moment, her villainous motives are clear and believable, her character remains consistent to these motivations throughout the entire film. Mother Gothel is set on staying young for ever and protecting the magic that keeps her that way. She’s emotionally outright manipulative toward Rapunzel which reinforces Rapunzel’s dependency on her and her naivety. Rapunzel’s naivety is believable, though it is clear that she is self sufficient, intelligent and imaginative. Thus when she leaves the tower, the way she learns and acclimatises to the outside world is also believable.

This is a classic fairytale story, complete with rescuing. Less ‘traditional’ is the way in which Rapunzel does an awful lot of rescuing of her guide Flynn. Flynn is goofy but likeable and not quite prepared to meet someone like Rapunzel who is intriguing and trigger happy with the fry pan. Flynn has princely good looks, a manner that suggests a certain confidence with charming women, and I have to say that one of my favourite lines in the movie is “You broke my smoulder!”. As Flynn and Rapunzel make their way to the city in order that she might see the floating lanterns, it is clear that Flynn learns as much from Rapunzel as she does from him.  I also appreciated the band of unlikely friends they met along the way (although in this aspect it was masculine character heavy).

As far as supporting characters go, hands down the non verbal characters have it – there were three. It was at every point very clear what their intended communication was and they were likeable and very different in both personality and motivation. Maxiumus the noble steed was a delight to watch at every point, I couldn’t love the character more if I tried. His dedication to apprehending Flynn for the theft of the crown is admirable, and the array of less than horse-like behaviours in pursuit of this goal are endearing, as is the truce like relationship that eventually occurs between Maximus and Flynn. Similarly Pascal the chameleon is a delightful best friend character for Rapunzel, giving her a playmate and confidant, someone to encourage her and occasionally mock her, a constant companion who supports the story and never short circuits it. The third non-verbal character is actually one of the ruffians they meet whose secret dream is to be a mime. The mime is a minor but articulate character, which for a non verbal character says a lot.

The band of thugs and ruffians the pair first meet at the ‘Snuggly Duckling’ (seriously what a cool name for a thug and ruffian pub!) are every bit as intimidating as you’d expect in the first few minutes, but Rapunzel’s determination to see the lanterns wins them over when she explains why she needs Flynn (who is apparently on everyone else’s black list) as her guide. Singing, dancing and absurdity ensue with each of the ruffians exclaiming their secret hidden dream.

Of particular note about this sequence is that although all of the characters were male, they all had dreams that fell into the realm that I’d loosely title ‘non traditionally male interests’. This was especially cool as a dichotomy playing off the fact that they were engaged in what were clearly defined stereotypical male occupational roles for a fairytale kingdom.

Other more minor aspects that I appreciated about the movie included the overall darker tone of the movie. It was a little bit more sinister than I’ve seen of Disney in recent years, a little less sanitised and it is something that I think really supports the film’s success. I enjoyed that although there was magic glowing hair as one of the keystones of the story, that the story was less about the hair/magic and more about Rapunzel herself. Even the romantic storyline played second fiddle to her overall desire to fulfill her dream to see the lanterns in person (aka: metaphor for self actualisation). I also have to comment on how much I enjoyed the lowly frying pan wielded as a formidable weapon throughout the film. This may seem like a minor point to appreciate, however, the fact that it is an ordinary implement found to hand says different things about violence and self protection as oppose to purposeful weapons for offensive violence.

I find very little that I could nitpick about this movie and I choose not to do so as it would feel petty given that I’d be searching as opposed to reviewing honestly. This film was very entertaining from an adult point of view, and having seen it today in the company of a three and five year old, entertaining and sustaining for them as well.  I thoroughly enjoyed the film and would recommend it without reservation.